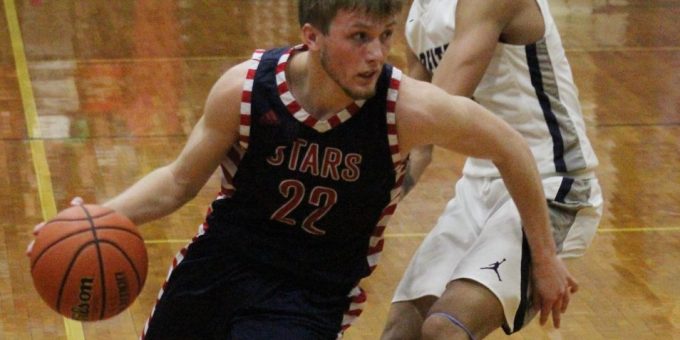 (BEDFORD) – Rankings, team or individual, are worth the same currency as counterfeit money. Somebody’s “expert” judgment doesn’t buy anything on the basketball court. It’s a proving ground, not an election opinion poll.

Make up your own mind. Watch Evansville Reitz star Khristian Lander, rated the best junior guard in the country by ESPN, second at his position by Rivals. Is he worth the hype? His 10 college scholarship offers, from every major program in the Midwest, would indicate that answer is ‘yes.’

If the analysis of the “gurus” doesn’t impress, Lander will. He’s the real deal, the catalyst for the Panthers as they prepare to make their first visit to Bedford North Lawrence on Friday night.

Lander, whose left-handed game and flamboyant hair style spark comparisons to Sacramento Kings standout De’Aaron Fox, has all the tools to be a future point guard at higher levels. He’s the recruiting target of Indiana, Purdue, Michigan, Kansas, Louisville and others.

“He’s very unselfish, a true point guard,” Reitz coach Michael Adams said. “The reason he’s being recruited so hard is he checks all the boxes. He’s long, athletic, quick, he scores in a variety of ways.”

Lander is averaging 19 points for the Panthers (6-3), who have more weapons than the lanky kid with the ball in his hands. Junior wing Owen Dease, who can stretch defenses with his exceptional range, and senior guard Mar’Quon Givens also average in double figures for a team that’s still missing some key pieces because of injuries.

“We’re still finding our way,” Adams said. “We are not who we will be later on.”

Reitz is on its way to that point after an impressive 81-74 victory at Bloomington North and a 77-46 demolition of Boonville the next night. Lander, who needs 13 to reach 1,000 points for his career, had 25 points against North.

“He might be the best player we see this year,” BNL coach Jeff Hein said. “He’s going to have the ball in his hands, and it’s hard to get it out of his hands because he’s so quick and athletic. He’s getting highly recruited for a reason.

“Reitz is a very good team. They can get going (averaging 70.9 points). We’ll have to play really well against them. They have some weapons on the offensive end, and they’re starting to play well and come into their own.”

Reitz has been a press-and-run team under the Adams watch, trapping at every opportunity. The Panthers will test BNL’s poise and mental toughness when the tempo shifts into high gear. And the Stars might not mind that.

“We’d like to slow the game down with our defense, but we’re going to take advantage of scoring chances, I don’t care if it’s off zero passes or 40 passes,” Hein said. “They don’t usually spend a whole lot of time working the ball, so it’s a tough matchup.”

BNL will counter with its own stellar guard in senior Brayton Bailey, who’s averaging 20.9 points and 7.5 rebounds. He has torched Milan (a career-high 38 points), New Palestine (a triple-double) and Warren Central (22 points) among others.

“Bailey is so fun to watch,” Adams said. “He’s just a really good player. We can’t let him go nuts, can’t allow him to make the people around him better, which he does so well.”

BNL won last year’s game at Reitz 62-61 as the Stars rallied from a 57-52 deficit in the final 2:45 for one of their signature wins of the campaign. Jathan Ritter had 21 points and Bailey totaled 16, while McCall Ray hit the go-ahead free throw with 6.8 seconds left.

The Stars (6-6) are looking for their next signature win, and this would qualify. BNL had an upset alert blaring last week before No.5 Warren Central escaped with a 52-49 triumph.

“We’ve played well the last couple of games,” Hein said. “We’re trending in the right direction. We were really going well until that tournament (the Danny Bush Classic over the holiday break), we kind of fell off the cliff a little bit. Now we’re going back up.”

Last meeting: Last year at Reitz, McCall Ray’s free throw with 6.8 seconds left secured a 62-61 victory for the Stars. Jathan Ritter had 21 points and Brayton Bailey added 16 for BNL, while Khristian Lander had 31 for the Panthers.