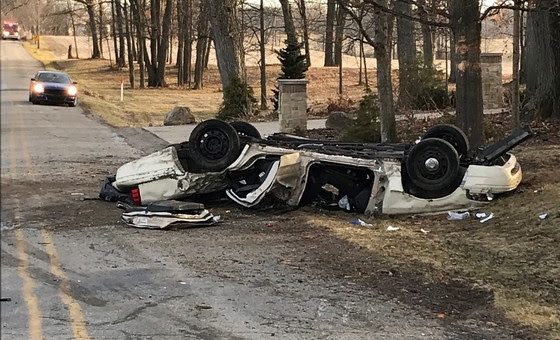 (COLUMBIA CITY) – The Indiana State Police is currently investigating a single-vehicle crash that claimed the life of a Columbia City man earlier this morning. The crash occurred on Old Trail Rd just east of County Road 300 East, which is just northeast of Columbia City in Whitley County.

Arriving on the scene within a minute, Reed found a Ford Crown Victoria passenger car overturned on the south edge of the road with two occupants entrapped and seriously injured.

Master Trooper Aaron Cook arrived immediately thereafter. Due to the extensive nature of the vehicle damage, the Troopers were unable to provide immediate medical assistance. Fire rescue units arriving on the scene a short time later were able to extricate the adult male driver, who was then flown by Samaritan helicopter in serious condition to Parkview Hospital in Fort Wayne.

The adult male passenger, however, succumbed to his injuries and was pronounced dead at the scene by the Whitley County Coroner.

Master Trooper Reed’s initial investigation of the crash revealed that Donnie Jackson, 30, of rural Columbia City, was operating a 2007 Ford passenger car eastbound on Old Trail Road from CR300E. Immediately prior to the crash, Jackson had passed another eastbound vehicle at a high rate of speed while in a no-passing zone.

For an unknown reason, Jackson’s vehicle left the roadway to the north, overcorrected as he came back onto the roadway, then lost control and impacted a tree on the south side of the road.

Both men were wearing seatbelts at the time of the crash.

This crash and the causation factors that may have contributed to this incident remain under investigation. There is no further information to release as this time.