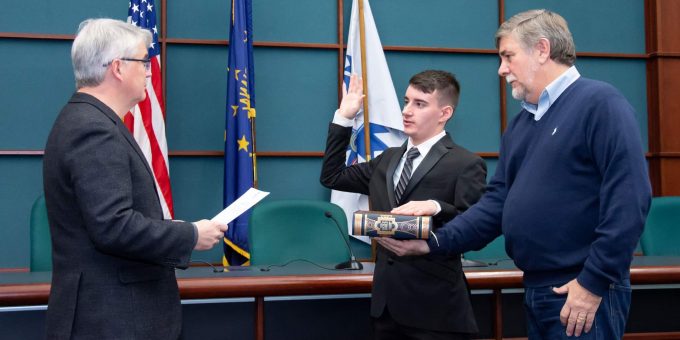 (BLOOMINGTON) – Bloomington City Hall was busy to start the new year off with the swearing-in of new police officers, incoming elected officials and the dedication of a room to former Bloomington Mayor Tomilea Allison on January 1.

On January 1st, two new Bloomington City Police Officers, Tyler Line and Robert Sweeden, were sworn into service. The new police officers will spend time in training at the Bloomington Police Department before heading to the Indiana Law Enforcement Academy later in January.

The officials were joined by friends, family, and members of the public.

Mayor of Bloomington from 1983-1995, Tomilea Allison was the first woman elected to the office. During her tenure, Bloomington’s historic downtown saw a period of revitalization, including the transformation of the former Shower’s Brother’s Furniture Factory into City Hal.

Mayor Allison also led efforts to produce Bloomington’s first master plan, she secured Bloomington’s First Tree City Designation, and she laid the foundation for many facilities and programs offered through the city’s park and recreation department.