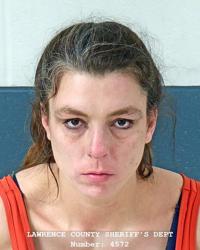 Troopers learned Shifflett was also wanted on two active arrest warrants – one from Lawrence County and one from Owen County.

Trooper secured a search warrant for a home in the 5800 block of Taylor Ridge Road in Greene County.

Upon arrival, troopers encountered the homeowner, 52-year-old Garry Chaney, of Bloomfield near the edge of the yard. Upon entering the home, Troopers located Shifflett and she was arrested.

During the search, troopers located meth near the area where they first encountered Chaney after he had attempted to conceal it by throwing it into the weeds. They also located what was believed to be an illegally taken whitetail deer.

The Indiana Conservation Officers were notified about the deer.

Shifflett was arrested on the two warrants and transported to the Lawrence County Jail.

Once there, jail staff located meth and marijuana that Shifflett had concealed in a body cavity.

Anyone with information regarding illegal drug activity is encouraged to contact the Indiana State Police Bloomington Post at 812-332-4411.  Your tip can remain anonymous.