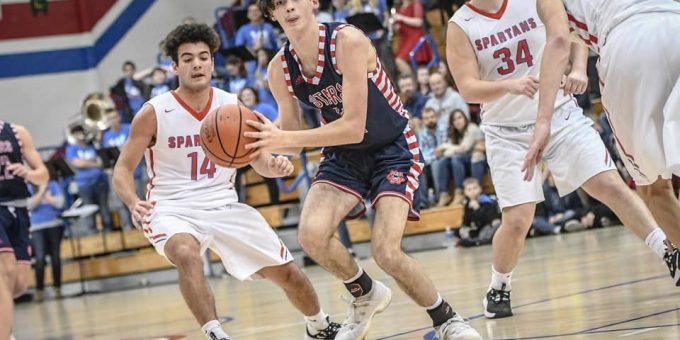 BEDFORD – After eight months and seven regular-season games, Jeff Hein is getting comfortable with his new team, with its nuances, with the buttons to press and the results that he expects.

The last five games have been evidence of the transition. Bedford North Lawrence won four in a row, after a struggling start, and battled Class 3A’s top-ranked team with a little bit of a second-half snarl. Once the starting lineup got stabilized, once the level of accountability was set, the Stars were a formidable unit.

Now, as BNL nears the midpoint of the campaign, the Stars will leave the comfort zone of familiarity and face three new opponents during pool play in the inaugural BNL Tournament on Friday and Saturday.

The fourth game will be determined by pool standings. The B pool will include New Palestine (1-3), Scottsburg (5-2), Class 4A No.14 Bloomington North (6-0) and Class 4A No.8 Fishers (7-0), and the corresponding pool rankings with set up the final games on Saturday night.

This tournament will not only introduce new foes, but expose the Stars to different styles of play. Each region of the state has certain characteristics of play.

“One of the big things I’ve noticed, there’s different approaches to how coaches are playing the game, like post players aren’t utilized as much in this area,” Hein said, and he doesn’t have one of those anyway. “Harrison will have two post players, and we haven’t seen that much this year. University has two post players, so we’ll see things we haven’t seen. Around here it’s more spread the floor, looking to drive and shoot the three.”

BNL, by roster structure and strength of talent, falls into the latter style, headlined by senior Brayton Bailey, who’s averaging 19.7 points and 7.8 rebounds while directing the offense. He’s getting support from senior guard Trey Mollet (11.1 points) and junior forward Jackson Miracle (10.0 the last five games). But it all starts with the kid who now ranks sixth on the school career scoring list with 1,192 points. Scott Turner (1,229) is next in his sights.

”He has played really well,” Hein said. “And his passing is the big thing. He does it in an unselfish manner, he makes others around him better. That’s what good players do, and I think he learned that from the best.

“They all know he’s got the experience, he’s a leader and he has the ball in his hands. He leads us in about every category. But when we’re making shots outside, it opens the middle up for him.”

Milan is certainly a historic name in Indiana lore, winning the most famous game in Hoosier Hysteria history for the 1954 state championship. These Indians won’t have legend Bobby Plump, but they will feature junior forward Adam Norman (15.6) and junior Carsyn Ascherman (12.8).

“This tournament gives us an opportunity to play against some non-traditional opponents and challenges us to play against some significantly larger schools,” Milan coach Randy Combs said. “The chance to compete against a Coach Hein team, that you know will be prepared and well coached, offers some unique challenges.”

Next will be Harrison, which BNL hasn’t seen since the 2001 regional. The Warriors (2-4) have balance with four starters averaging 9 or better, topped by junior forward Terrence Ringo (13.3) and sophomore guard Jahni Summers (10.0).

“BNL is a basketball program with such rich tradition,” Harrison coach Nathan Fleenor said. “We are lucky to get an opportunity to play BNL on a Friday night in a difficult atmosphere. It will be a great experience for our young team. Every game in this tournament will be difficult to win, and we will play different styles.”

University is coming off an impressive 95-37 victory over Seton Catholic on Monday afternoon. Max Greenamoyer had 25 points and Camden Brown added 13 in that blowout triumph.

Game notes: Milan coach Randy Combs graduated from Vincennes Lincoln and played against BNL during his high school career. Combs is in his second stint with the Indians. He coached there from 1995-2008.

Records: Evansville Harrison 2-4 (vs. University on Friday); BNL 4-3 (vs Milan on Friday)

Game notes: Evansville Harrison won the first game in the series 66-64 in the Class 4A regional in 1999.