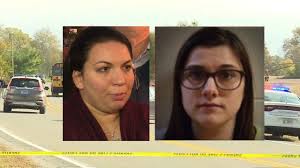 (ROCHESTER) – The mother whose three children died after being hit by a driver at a bus stop in October 2018 may be charged after she confronted the woman convicted in their deaths Wednesday in the courtroom.

Fulton County Prosecutor Michael T. Marrs says Brittany Ingle might face a battery charge after an incident between her and Alyssa Shepherd at the Fulton County Courthouse following Shepherd’s sentencing for the deaths of her children 9-year-old Alivia Stahl, and her 6-year-old twin brothers, Mason and Xzavier Ingle.

A fourth child, 11-year-old Maverick Lowe, was seriously injured and is recovering.

Officials say as Shepherd was being escorted out of court after her sentencing, Brittany Ingle attacked Sheperd and struck her in the face.

Shepherd was sentenced to just four years in prison, three years of home detention and three years probation, along with a 10-year driver’s license suspension.