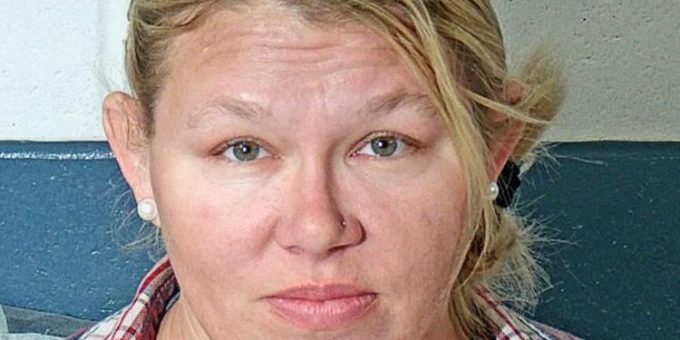 (MITCHELL) – A Mitchell woman was arrested on a warrant on Thursday, December 12th after she allegedly pointed a gun at child in August.

Mitchell Police officers arrested 37-year-old Carrie Tolbert on charges of neglect of a dependent by placing the dependent in a situation that endangers them, criminal recklessness with a deadly weapon, and pointing a firearm at another person.

She paid a $750 cash bond and was released from jail. She was ordered to have no contact with the child. Her initial hearing is scheduled for January 7, 2020 at 10:30 a.m.

According to Lawrence County Superior Court I probable cause affidavit, the incident happened on August 26, 2019. A child told the police that his mother got mad and pointed a gun at him.

He told police his mother was angry that his grandmother would not give his mom money because of something he had done.

The alleged victim said he was cleaning his room when Tolbert threw a lamp and broke it. She then broke a video game console and kicked him. She then pointed a handgun at herself and then at him.

The boy left the home and went to a neighbor’s and called his father.

Police spoke to the boy’s father who told police that Tolbert called him from his son’s phone and was yelling at him about the boy’s behavior.

The father picked the boy up at a restaurant.

The next day, Tolbert attempted to pick up the child early from school, but Mitchell Community Schools School Resource Officer Rob German contacted the Department of Child Services.

On August 28th, police spoke with Tolbert. According to the affidavit, she told police a completely different story than her son’s.

Tolbert told police that the boy borrowed a video and that she wanted it back. She also told her son to do his homework and that he “started mouthing off.”

She then found an inappropriate magazine in his room and SD cards which he allegedly had taken from the school. She also found gun shells in his room and told him she wanted his guns. While the boy was collecting the guns she took his phone and a video game console.

While she was putting the guns in a box in her room the boy told her she was a bad parent. She says she did pick up the video game console and slammed it on the ground.

She told her son if she was such a bad parent that she wasn’t going to “put fun into his life.” That is when the boy said he wanted to leave and go live with his father. Tolbert told him he was not going anywhere.

She says that while she was cleaning the boy’s room he left the home.

Tolbert then surrendered six guns that were in the home to officials.