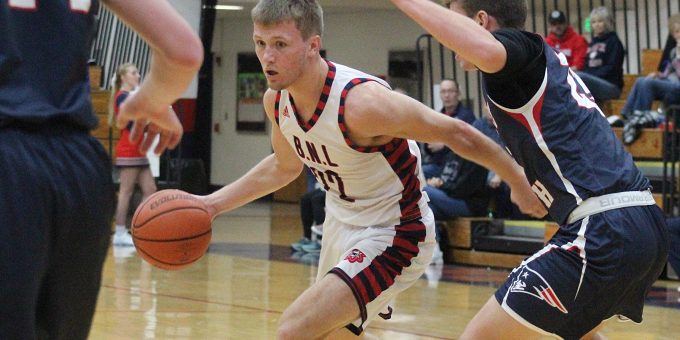 BEDFORD – This is not among the basic road signs Indiana drivers must memorize to qualify for a license, but it’s definitely applicable as Bedford North Lawrence prepares to journey into uncharted territory:

The Stars will make their maiden voyage to South Knox for a series debut on Saturday night, and the danger warnings are rampant. The Spartans have four practice sessions, and a Friday night free, to prepare for BNL, which will be coming off a tough Hoosier Hills Conference clash with Columbus East just 24 hour earlier.

Factor in South Knox’s expected raucous crowd for homecoming and a chance to conquer a 4A opponent, and BNL coach Jeff Hein – familiar with his former Knox County neighbor after his coaching and AD stint at Vincennes Lincoln – is expecting quite the welcoming committee. One with a bite.

“There is some set-up for them to be successful,” Hein said. “They’re a quality program, have been for a long time. We’re coming off a conference game and they don’t play Friday.

“Our kids have to understand it will be a packed house. It’s a fun place to play, always a great atmosphere in that environment. They’re in the comfort zone and they have the former Lincoln coach coming to town. It should be fun. We‘ll have to show up and play exceptionally well.”

The question arises why South Knox would go up two class levels for competition. The answer comes from coach David Burkett, a Greene County who wants to pattern his program after Bloomfield, which never shied away from Bloomington and Bedford neighbors.

“We’re trying to set a standard here, develop a culture where it’s expected to win, night in and night out,” said Burkett, who also has previous coaching experience with three small-college programs. “It’s an expectation I will demand of them, and they expect it of themselves.”

The Spartans lost four starters (including star Gabe Bobe, now playing for Walter McCarty at the University of Evansville) from last season, but the lone returning veteran is now their scoring leader in 6-4 senior forward Justin Fickling, a versatile athlete who’s averaging 15 points per game.

“We’re young, but this team has a lot of room for growth and we’re getting better every night,” Burkett said.

South Knox has won two straight, including the county rivalry battle with North Knox on Tuesday. The Spartans are allowing only 36.7 points per game, although Burkett is concerned about BNL senior leader Brayton Bailey.

“They’re going to play extremely hard,” said Burkett, who got a live look at BNL’s win over Terre Haute North. “Bailey is a very good player. Hopefully Bailey doesn’t seem t the gym record on us. That’s what I’m worried about.”

Last meeting: This is the first game between the programs

Game notes: South Knox coach David Burkett graduated from Bloomfield in 1998. He’s 20-8 in his second season with the Spartans.