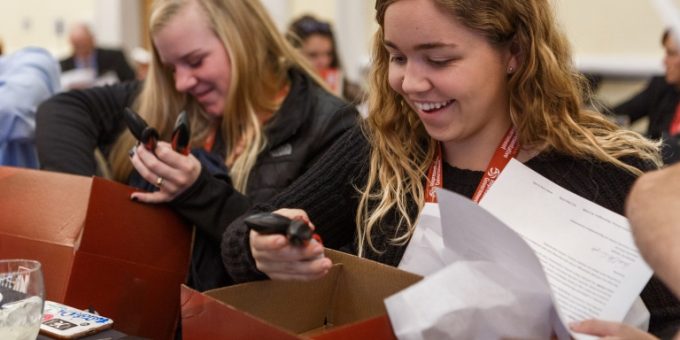 (UNDATED) – The boxes have been shipped. Now begins the fun — and educational — part.

The Center on Representative Government at Indiana University and the IU Office of the Bicentennial have publicly launched the new CitizIN app, a free interactive game that explores 200 years of Indiana history. CitizIN supports the teaching of Indiana studies and the incorporation of Indiana topics into a standard U.S. history course.

IU President Michael A. McRobbie introduced the new app at Friday’s fall conference of the Indiana Council for the Social Studies, which was held on the IUPUI campus. McRobbie also announced that boxes containing information about the app were being delivered Friday to the principals of each of Indiana’s 400 high schools.

CitizIN is intended to serve as a fun resource for teaching about the history, government, geography, economics, and people of the Hoosier state, using primary source materials from the Indiana Historical Society, the Indiana State Library, the Library of Congress and other institutions.

A signature project of the yearlong IU Bicentennial celebration, the app was created in response to the 2017 passage of Senate Enrolled Act 29, which required that Indiana high schools offer an Indiana study elective.

“Public research universities, like Indiana University, put great emphasis on their public mission, which includes educating students for active, engaged citizenship and preparing them for public service,” McRobbie said. “By studying Indiana’s past, students can confront the challenges of the 21st century with a deeper awareness of the alternatives before them and a fuller understanding of the likely consequences of the choices and decisions they make.”

CitizIN was developed by the Center on Representative Government as a companion to the books “Hoosiers and the American Story” and “Hoosiers, A New History of Indiana” by IU Professor Emeritus of History James Madison. The center and the IU Office of the Bicentennial partnered with more than 25 Indiana agencies and organizations to select the primary sources for the app, which is targeted for Grades 6 through 12. In addition, faculty and administrators from a number of high schools and school corporations around the state provided input on the app’s content.

The logo for the project includes a cartoon depiction of the Say’s firefly, Indiana’s official state insect. The selection of the firefly as the state’s insect was a result of heavy campaigning by students from Cumberland Elementary School in West Lafayette, especially Kayla Xu, now a seventh-grader.

CitizIN is formatted for all types of computers and computer tablets, including Chromebooks, as well as for mobile devices, and it’s available in the Apple App Store, on Google Play and on the website CitizIN.org.

Indiana University was founded on Jan. 20, 1820, making it one of the oldest public universities in the nation. To celebrate its bicentennial, IU has developed a multiyear, multicampus program that recognizes and chronicles IU history, showcases the university’s significant contributions to the world and sets a course for the university’s next century.

The Center on Representative Government was founded in 1999 by former U.S. Rep. Lee Hamilton with a mission to help prepare the next generation of citizens by working with educators to create programs that inform, inspire and motivate students and to encourage civic participation to seek solutions to the many challenges that confront communities today.