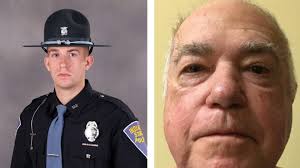 (JEFFERSONVILLE) — A southern Indiana judge has convicted an 81-year-old man in the shooting of a state trooper who pulled him over for erratic driving.

The Clark County judge found Oscar Kays of Jeffersonville guilty of attempted murder but mentally ill Wednesday during a bench trial. His sentencing is set for Dec. 12.

Prosecutors said Kays shot Trooper Morgenn Evans in the head when the officer pulled him over for erratic driving in December 2017 in downtown Jeffersonville.

Evans returned fire, discharging 11 shots, one of which hit Kays through his truck windshield before Kays left and drove to his home, where he was arrested.

The News and Tribune reports both Kays and Evans were treated for the non-life threatening wounds. Evans says he suffers at times from serious headaches and nausea.