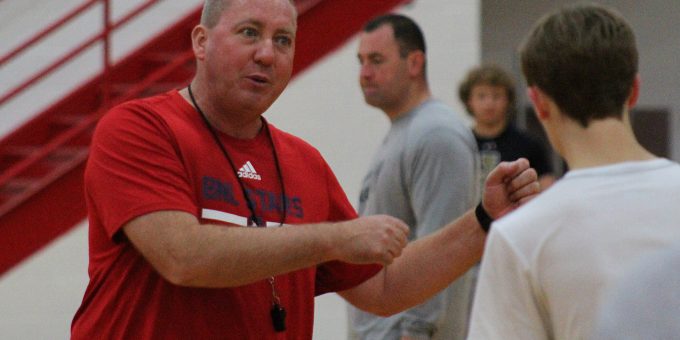 Welcome back. After a three-year absence from the sideline, Hein returned with fire and passion, quoting Indiana legend John Wooden and preaching the old-time principles that have been the backbone of the program – indeed, the foundation of Hoosier values – since its inception.

Monday’s first official practice session for the 2019-20 season was a typical two-hour test of toughness for the 23 athletes who would like to play for the ninth coach in BNL history. Not all will survive. Cuts will be made. Others, as some already have, might choose not to return.

The chosen ones, if Day 1 is any indication, will earn badges of distinction. If they didn’t know what the game was like during the golden age of BNL basketball, they are about to find out. It’s the Hein Way or the highway.

The Stars hit the floor running – quite literally. If nothing else, they’ll be in military-grade shape before long. Hein has the buzz-cut look, and the growl, of a drill master. And he has the record to demand respect.

Hein owns a 295-206 career record in 22 previous seasons. He guided Evansville Bosse to the Class 3A state finals in 2007, he has won a total of 7 postseason championships, and BNL hasn’t won a sectional since 2001. So there’s work to be done to restore some shine.

“We have a lot of things to learn,” Hein said. “It will take time. It won’t happen overnight, unfortunately, just to implement my system, the way I want to see BNL play.”

BNL lost six seniors from last year’s 13-10 campaign, and only one returning starter was back on the court to raise the curtain on the new year. Of course, that one is senior guard Brayton Bailey, an Indiana Junior All-Star who led the Stars in scoring (18.9), rebounds (6.7) and assists a year ago. He also joined the elite list of BNL players with over 1,000 career points.

Who else? That remains to be determined. Hein spent the June scrimmages and camps, the fall conditioning and preseason practices in evaluation mode with staff members Damon Bailey, Zack Robbins and Frank Decker.

“It comes down to we’re going to have to win games as a team,” Hein said. “We know we have a real nice player in Brayton, but we have to build some kids around him, working as a cohesive unit. One guy can’t win games for us. Once that happens, it will make us better as the year progresses.”

BNL will have stepping stones as markers for the next two weeks: an intrasquad scrimmage on Nov. 18 and the IHSAA-sanctioned scrimmage with Columbus North on Nov. 21. Those days will be much like the first. Running, without the gunning.

His post-practice speech to the Stars included a Wooden quote: “Why do we play the game? To challenge ourselves to be the best we can be on the court, in the classroom, and in the community through teamwork, discipline and sweat. Team above all.” Hein called it the BNL Stars Way.

“Fundamentals and conditioning are the two things right now,” Hein said. “Whatever the number of kids is that we keep, we want to have competitive practices.”

BNL will open the regular season at Bloomington North on Nov. 26.