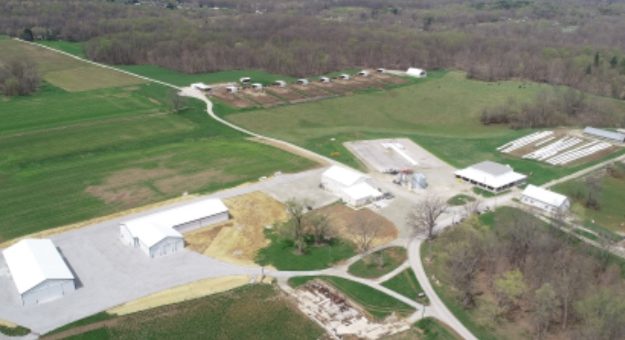 The research facility is on the edge of a limestone quarry and was formed in 1914 as a former apple orchard and currently home to the Indiana Beef Evaluation Program, which is one of eight facilities throughout the State of Indiana.

The farm was a gift to Purdue from Lawrence County settler Moses Fell Dunn. Dunn was a lawyer and member of the state legislature, Dunn gifted more than 520 acres of farm ground to the university in 1914.

“We have about 880 acres of farmland at this point and rent about another 160 acres,” says Brad Shelton, Director of the  Purdue Agriculture Center. “About 600 acres is pasture that helps feed about 190 to 220 cattle on a given year. We raise Simmental and Angus cattle.”

Before donating the land to Purdue, Dunn planted more than 6,000 fruit trees on the site. He believed southern Indiana climate was ideal for fruit trees. The Feldun-Purdue Agriculture Center orchard helped establish the local apple industry.

In 1915, the orchard was renovated and crops, were planted to determine the suitability of the fields for experimental work in soil and crop improvements.  The orchard proved to be valuable and renovations as the apple harvest improved from a mere 200 bushels to up to 8,000 bushels. However, over time the orchards were removed.

Limestone was quarried out of the Dark Hollow Quarry, Shelton noted. The stone can be found on buildings such as the Pennsylvania State Capitol building and Biltmore Estate in Asheville North Carolina.

Hopefully, a limestone company might want to buy some of the piles of limestone located on the property.

Workers continue to work in soil and crop improvements.

“We raise wheat, corn, and soybeans on the farm. Using corn for silage, keeping what we need, and then market what we do not. Soybeans, we use it for crop rotation and then market our soybeans. And then grow alfalfa-orchard grass, clover, and fescue for our hay,” Shelton continued.

Nick Minton serves as the coordinator for the bull testing as part of the Indiana Beef Evaluation Program, commonly called the bull testing station.  This was moved from Carmel to Feldun in 1989.

Since 1976, more than 10,000 bulls have been tested for genetic defects, growth, meat quality, structural and breeding soundness, and expected progeny differences.

During the 146-day test period, bulls are weighed, measured and have blood drawn on a monthly basis, with the help of several Purdue Animal Science students. The Indiana Beef Evaluation Program is not affiliated with Purdue University but has its own board of directors, consisting of commercial, breed, and cattle industry representatives.

“Not every cow is going to calve at the same time, but generally around the same period of time,” Shelton stated. “Last year, due to the heat, the breeding season was not a very productive year. So production was down due to the heat and humidity.”

“In the last several years we have also worked with a geneticist on campus to validate the breed indexes as well as determine the long term effects on mature cows in size and productivity. And looking at the growth of calves and comparing the weights during weaning of the calf and from that point forward,” he added.

For example, the Dollar Beef Index in beef production facilitates simultaneous multi-trait genetic selection for feedlot and carcass merit. $B is a terminal index representing the expected dollar-per carcass difference in progeny post-weaning performance and carcass value compared to progeny of other sires.

Brad Shelton was raised in Orange County, Indiana and was raised on a farm that grew mixed crop, and livestock. Shelton went to Purdue and has in some form worked for Purdue since 2000 when he worked at the Crop Diagnostic Training Center, and then was the Washington County Extension agent before starting at Feldun in January 2012.