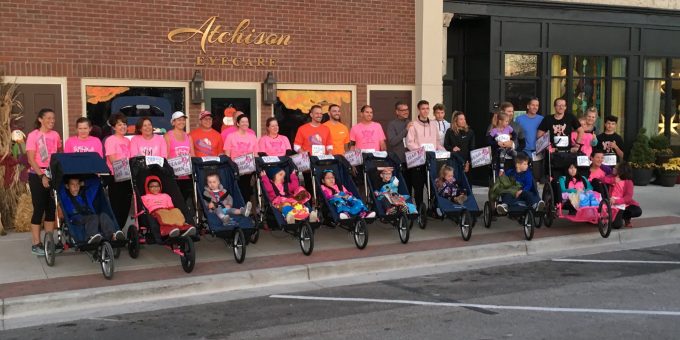 (BEDFORD) – Brent, Kathy and Amber Voightschild have always been runners and participated in many marathons. Now the family is working to make sure that those in the special needs community are included in local events.

Jody and Shane Bennett have two children Landon and Baylee who both have a form of muscular dystrophy. Their two children can run, but walking long distances is difficult for their daughter Baylee. The Voightschild wanted to include them in their events. So they contacted the Kokomo Chapter to learn more.

Ainsley’s Angels provide wheelchairs to individuals with special needs to participate in races. Volunteers called angels runners, push them. The Voigtschilds participated in a race around Easter and a race around May of this year, according to Kathy Voghtschild.

Once they took part in the two events they wanted to bring service to Bedford. Their daughter Amber is also helping in the effort to raise money for wheelchairs so local individuals can be part of the local marathons.

They are in need of the special wheelchairs to carry the riders. The smaller chairs cost $1,000 and the bigger chairs are $7,500.  The goal at this point is to try and raise enough money to purchase 6 to 10 small chairs and three large chairs.

“It was not hard getting the guardian angels for the Bedford event. Everyone wanted to help,” stated Kathy.

“It does not cost any money to be in the race, only expenses are trying to get the chairs,” stated Amber Voightschild. During the Bedford event, there were nine who were able to take part in the Bedford Marathon.

“ It was such a joy, seeing the smile on their faces,” Kathy added.

The next event is a race on Thanksgiving Day in Mitchell called the “ Give Thanks to the Milers”  The event is a four-mile race and six individuals with disabilities have already signed up for the Mitchell event. There will also be a Christmas Eve race, and BatCole Marathon in September of next year.

Ainsley’s  Angels organization is 501(c) 3 non-profit and all donations are tax-deductible. Their mission is to ensure everyone can experience endurance events.  The first chapters were started in Louisana and Virginia Beach.

Ainsley’s Angels aim to bring awareness about America’s special needs community through inclusion in all aspects of life. Serving as advocates to providing education and participating as active members in the local communities.

You can donate, or be a part of the family by joining the organization.

“We are just starting out, so there are no meetings to attend but if you are interested email us or go to the facebook page,” Kathy added.