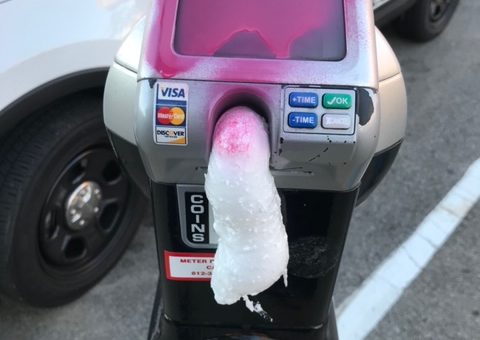 (BLOOMINGTON) – Parking enforcement officers in Bloomington spent Wednesday morning deconstructing 125 parking meters after finding that someone spray-painted them pink and green and filled the coin slots with a hardening foam.

Damage to the meters is estimated to be approximately $5,000.

Three hours later, parking officials were deconstructing the meters and repairing them.

Motorists may still park at the damaged meters using the ParkMobile phone app. Replacement parts have been ordered to fix the vandalized meters as quickly as possible.

Police have not ticketed motorists who parked at the damaged meters and that have not utilized the ParkMobile app. However, officers do anticipate the meters to be fixed quickly.

Detectives are reviewing all available security camera footage in the area for possible suspects.

Anyone with information about the crime is asked to call the Bloomington Police Department Detective Jon Muscato at 812-349-3326.