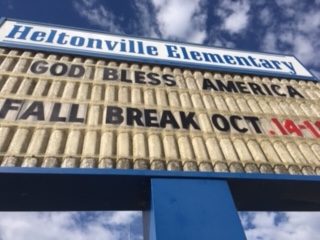 (BEDFORD) – A petition drive is underway to try and save some of the rural elementary schools in Lawrence County.

So far petitions are at Fayetteville, Heltonville and Springville stores and at Johnny Junxion.

According to a clerk at the Heltonville Store, they are on their fourth set of petitions. The other locations had approximately 20 signatures between the three locations, however, it is not known whether how many signatures have been collected prior to Saturday.

“ I believe that smaller schools keep bullying and drugs down,” according to Martha Hayes Heltonville.  “I am against consolidating the elementary and middle schools.”

Last month, Denise Barnett appeared before the school board stating she was a part of the 1975 consolidation of the high schools and hated it. According to Barnett, “It has not improved the learning environment for students.”

Jon Roodschild also, asked about the budget for the 2020 School year and was told by school officials the North Lawrence Community Schools revenue will not change if any school closings should occur. The 2020 budget is projected just over $52.5 million which is comparable to the 2019 budget.

Dr. Ty Mungle received over 100 inquires wanting to serve on the Visionary Committee with a total of 40 selected from the group.  Thirty-two of those individuals have been attending the meetings on a regular basis.

It is expected by the end of this month the Visionary Committee will be asking for public comments on the recommendations of the committee.  Andrew Clampitt Communications Director for the North Lawrence Community Schools states that four recommendations will be made by the committee, and those will probably be narrowed down to about two.

In July, Dr. Mungle presented the enrollment numbers in the North Lawrence Community Schools, including elementary,  middle schools, and high schools. In addition, he presented the salaries of the teachers as well as the grades from the Indiana Department of Education.

Dr. Mungle stated in the July school board meeting that the time to address these issues is now, as the corporation itself is teetering on the edge of the state taking over the school corporation if something is not done.

Student transfers out of the school corporation have effected the corporation. Locally, parents have transferred their children using Choice Scholarship with 70 students, Charter Schools with 123 students, Parent Choice with 147 students and other options 5 students.

WBIW has not obtained the numbers for the 2019-2020 School year at this time. However, when looking at the information to make some decisions, it will be based on a four to five year period and not the current school year.

The costs of operating a school has also increased. This includes securing the doors, resource officers, and health care. Health care costs have risen more than 63 percent.

The school corporation changed from Anthem Blue Cross/Blue Shield to IU Health which has added expenses to some according to some North Lawrence Community Schools employees. Dr. Mungle states they will continue to look at some of these issues and figure out how to control these expenditures.

The corporation is also looking at how to improve grades issued from the Indiana Department Of Education and the success rate at each school.

“That may be taking a bus trip and see some of the things that make other schools successful in a school corporation our size,” Mungle stated.

Bedford North Lawrence High School received an A grade in 2014-2015 and a B grade in the years following.

The starting salary for a North Lawrence Community Schools teacher is $35,250 and the top scale stands at $61,960.

The committee continues to work every week. These committee members are from diverse backgrounds including members of the business community, educators, parents, and other stakeholders. This group would come up with solutions to challenges schools face and make recommendations to the school board. Mungle wants more community involvement in the growth of local schools.

The committee is making rapid progress in its work. They are reviewing facilities, student/staff, opportunities/strengths and weaknesses, finances of the corporation, and building plans and recommendations.

In late October or early November, the public will then be given the opportunity to provide feedback either through the North Lawrence Community Schools website, mail, email and other forms of communication.

The North Lawrence Community School Board of Trustees will make the final decision as this group only serves in an advisory capacity.