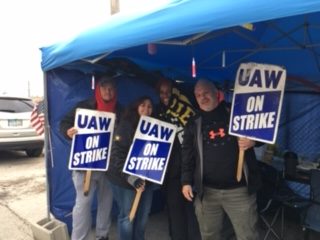 (BEDFORD) – The UAW members will remain on strike and locals are not expected to vote for ratification until some time next week.

Local UAW president Kevin Hutchinson was still in Ohio and not available to comment at this time.

Local General Motors UAW leaders from around the country today announced that the UAW GM National Council voted to accept the Tentative Agreement with General Motors. UAW workers will remain on strike until ratification.

The ratification informational meetings and the vote will take place beginning Saturday, October 19 and ending Friday, October 25, 2019. Members should contact their UAW Locals for dates and times for meetings and voting.

“We thank the public for their support during the strike and their continued support as UAW GM members review the tentative agreement,” UAW Vice President and Director of the General Motors Department Terry Dittes said. “Ultimately, UAW members will make the decision to ratify the agreement. Their unity and solidarity brought us to this moment.”

Three GM plants in Baltimore, Lordstown and Ohio will close according to the tentative agreement.