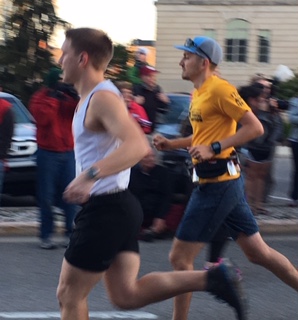 (BEDFORD) – The Limestone 5K and One Mile Run were Saturday morning with 651 taking part in the event. Out of that number, 88 participated in the Half Marathon, 467 in the 5K, and 96 in the mile run.

“This was a great day for the race. The number of participants was just about the same as last year,” says Jordan Webb Bedford Parks Assistant Recreation Director.

The weather cooperated with the runners as the morning was not too warm and not too cold during this year’s race.

Ainsley’s Angels of America participated in this year’s run. The group aims to build awareness about America’s special needs community through inclusion in all aspects of life. They serve as advocates for providing education and participating as active members in local communities.

Baylee Bennett was one of Ainsley’s Angels who took part in this year’s run.

“This year’s race makes Baylee’s third race. Her first run was in Indianapolis about three years ago, when Brent and Kathy Voightschild took her to the event in Indy,”  according to Jody Bennett. “We would have never thought she would be able to take part in these types of events and she now can.”

Baylee has muscular dystrophy as well as her brother Landon. Baylee’s parents are  Terry and Jody Bennett.

The results of this year’s race include: