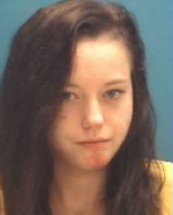 (COLUMBUS) – A Columbus woman is facing multiple drug charges after she spilled drugs all over the inside of a police car.

Around 2:50 a.m. Tuesday, Columbus police were called to the Walmart at 735 Whitfield Drive in response to a woman acting suspiciously inside the store.

Officers made contact with 20-year-old Alexis Daniels, of Columbus. This is not the first time Daniels had caused a disturbance at the store.

Daniels was arrested and patted down before being placed in a patrol car and taken to the Bartholomew County Jail.

Upon arrival at the jail, officers noticed a white substance on Daniels’ hands and the floorboard beneath her seat.

Police tested the substance and found it to be a mixture of heroin and fentanyl.

The patrol car was quarantined, and the interior was later cleaned by members of the Joint Narcotics Enforcement Team and Indiana State Police Clandestine Lab Team.

Daniels is facing charges of trespassing, obstruction of justice and possession of a narcotic drug.