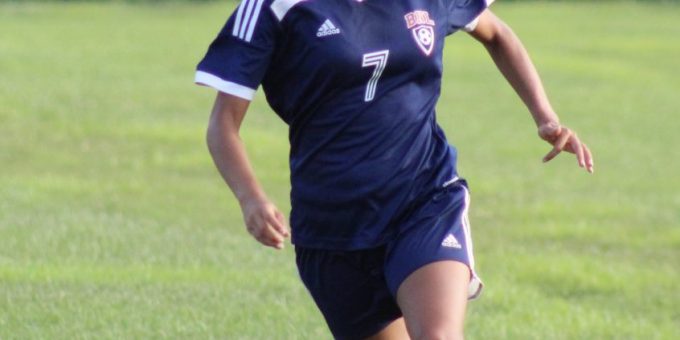 (BEDFORD) – Jennifer Ramirez has spent her senior season shadowed like the target of an under-cover police investigation. She finally stepped into the light.

Ramirez erupted for three goals and an assist as Bedford North Lawrence smacked Edgewood 4-0 on Monday, celebrating Senior Night with a dominating performance.

BNL (3-9) limited the Mustangs to only one shot, and Ramirez recorded a hat trick with a flurry of late goals, finally wearing down Edgewood goalie Trinity Robertson.

Ramirez scored early, striking at 34:11 of the first half. Robertson made three tremendous saves to keep BNL at bay over the next 58 minutes, but the Stars eventually found a way.

“We had plenty of opportunities,” BNL coach D.J. West said. “Hats off to their keeper. We probably had three that any other goal keeper would have given up, but she did an awesome job in net. She kept them in it. And as a coach, when you have a one-goal lead for as long as we did, it makes you nervous.”

Ramirez was the cure for the anxiety. She scored off an Adrian Collins pass with 15:59 left, then set up Makena Moore’s goal with a corner kick at 2:41. She added the final goal with 14.3 seconds remaining.

“It’s the best thing ever,” Ramirez said with a smile. “I love the feeling. It’s the best. I definitely needed this. My team tries to get the ball to me, and sometimes I miss.”

Even with constant defensive attention, often attracting a double-team clamp at the point of attack, Ramirez used her speed and skill to break free.

“It was awesome for her to get a hat trick,” West said. “That’s what we expected from her. It’s tough because teams know her, and they’re going to make it tough for her. She was able to get loose tonight and get the ball in the back of the net.”

Ramirez, Collins and Lois Kinser were among the six seniors (along with Amber Walker, Ashlyn Hill and Macii Miller-Green, who’s been sidelined by an ankle injury) making their final appearance at BNL Field. That trio paid four-year dues for the moment.

“It was a great team effort,” West said. “I’m proud of the seniors, especially Lois, Adrian and Jennifer. They’ve been four-year players for us and we couldn’t be more appreciative of the effort they’ve put in, the work they’ve put in, the leadership they’ve shown.”