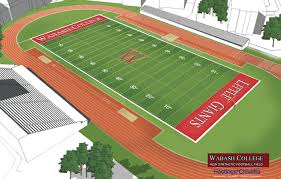 (CRAWFORSDVILLE) — Officials at a private liberal arts college in western Indiana are planning a new $13 million football stadium, which is scheduled to be completed in time for the 2020 season.

The stadium at Wabash College will include a new playing surface, relocated scoreboard, an all-weather track, upgraded concession areas, and expanded restrooms, the Journal & Courier reported. It will replace the Hollett Little Giant Stadium, which is over 50 years old.

“Our players feel like we have the best fans in the country, and this new stadium will further enhance our home-field advantage,” said Don Morel, Wabash head coach.

The announcement on Wednesday followed the school’s $225 million Giant Steps Campaign, which included gifts for the project. The new stadium is expected to be open for a Sept. 5 game next year.

The stadium will feature a 3,550-seat main grandstand, suites and what the school is calling the W Club Lounge, which will be on the second floor and accessible by elevator. It will include four suites and a Hall of Giants, paying tribute to Wabash teams and players.

“Wabash has a rich and storied football tradition, and it’s exciting to think that we will be playing in a new stadium a year from now,”

Wabash College President Gregory Hess said an anonymous group of donors has pledged substantial funding for the stadium at the school.

“We are grateful for their passion, enthusiasm, and commitment to our students,” he said.

Nearly 1,000 students are enrolled at Wabash, which is one of the few all-male schools in the country.

The new stadium will be named after former Wabash football coach Frank Navarro, as chosen by the donors. He coached the Little Giants from 1974 to 1977. His 1977 team ended with an 11-2 record and advanced to the Amos Alonzo Stagg Bowl, which is the Division III National Championship game. They lost to Widener University.