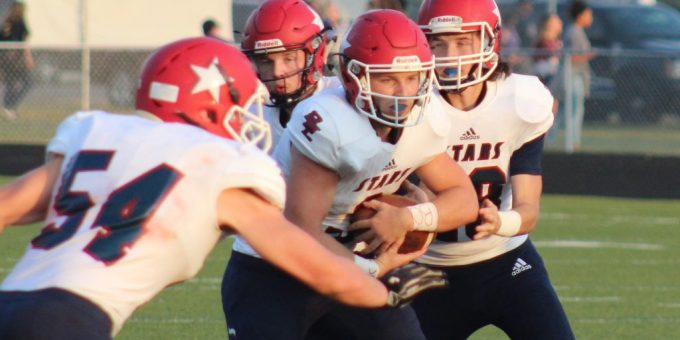 (BEDFORD) – With a do-or-die drive consuming yards and precious time, with the scales of the season tipping and teetering between salvation and doom, Bedford North Lawrence scripted memorable moments last week at No.15 Seymour.

Down-and-distance adversity, down-and-out reality of failure, down-and-dirty consequence of success. The Stars got turf-burn as they marched, using almost every second to earn their second victory.

That 24-21 win was defined by that final drive, one that should fuel the Stars as they prepare to challenge, as definite underdogs, their second straight ranked opponent.

X – Fourth-and-3 from the 20, with the play clock just an eye blink from expiring, Dalton Nikirk up the middle on a quarterback draw for 13 yards.

X – Second-and-goal from the 7, 22.5 seconds left, Nikirk to Woods in the right corner of the end zone. Touchdown. Triumph. Whew.

Can BNL duplicate that maximum effort? The Stars (2-3) will need that kind of performance when they host No.9 Terre Haute South (4-1) on Friday night.

“That’s the effort,” BNL coach Steve Weber said. “That’s what I’m looking for. I can live with a loss if that’s what we’re doing. So I’m proud of them. They did a great job.”

The Braves come in with a limp, having tripped and fallen hard during a 44-0 home loss to Bloomington South last week. It’s their first taste of adversity after four impressive wins, including conquests of Bloomington North (19-16 in overtime) and city rival Terre Haute North. How do they bounce back?

“We can react negatively and point fingers and listen to naysayers,” THS coach Tim Herrin told members of the media following the South setback. “Or we can say we have to strap it up and play fundamental, physical football. I think that will happen.”

The Stars come in with limps, having lost key personnel for the season already and now with more questions concerning the health of James Underwood, Woods and others.

“This team is hard to gauge. We’re still trying to bounce back, to be honest. We have a lot of new faces in there, so right now every day is a new day. That’s where we are.”

The Braves will feature a spread-offense running game with back Allen Haire (396 yards, 4 TDs) the focal point. Junior quarterback Caleb Stultz (47 of 99 passing with 3 TDs and 6 interceptions) and back Jacob Rutledge (5 touchdowns) are additional weapons.

“They’re good, very athletic,” Weber said. “Overall, a good ballclub. They’re fast in a lot of positions.They want to spread you out and run that ball. But they can hurt you if you don’t honor it. The key is recognizing things and getting in the correct alignment. If we can do that, we have a decent chance.”

South got slammed by Bloomington South because it struggled to defend the passing game as D.J. Bull completed 20 of 27 for 251 yards and three touchdowns.

“That didn’t surprise me, because South can beat a lot of people,” Weber said. “But the score surprised me. Sometimes teams just don’t match up, but they’re a better team than that score indicated.”

As galant as last week’s final drive was, BNL’s first possession was just as crucial and gave a glimpse into this week’s game plan. That opening drive was 80 yards, almost 5 minutes, and set the tone for confidence and execution.

“We were able to hold the ball and drive it,” Weber said. “That slows things down, gives our defense a breather. So we need to get some first downs and keep our defense off the field, control the clock and give ourselves a chance in the fourth quarter. They don’t want to slow it down, so we have to keep the ball in our hands.”

BNL won last year’s game 42-41 as McCall Ray threw three TD passes and ran for two more. That victory catapulted the Stars through an 8-3 campaign, while that loss for the Braves was the second of five straight during a 4-7 finish.

Game notes: The Braves are chasing their first winning season since 2014 – their only one since 1999.