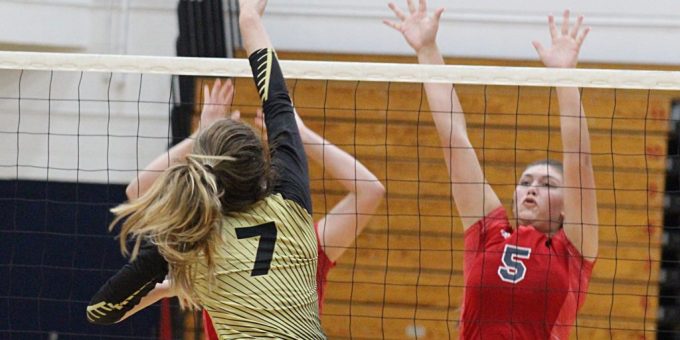 (BEDFORD) – Naughty, naughty, to tease like that. Fate enticed Bedford North Lawrence, promising a most pleasurable victory, then yanked it away in the most devastating way.

Down two sets, the Stars scrambled and scratched, clawing their way to back-to-back sets and forcing a fifth with a high-level comeback that defied their lowly record. Momentum was their friend, destiny their desire.

Would have been better for a merciful ending, limiting the pain, rather than coming so close to such a satisfying win – only to be denied.

The Hatchets (11-3) were not an upset target. They were pushed to their first five-set duel of the season, and would have fallen had not Emma Williams served her team to an 11-5 advantage in the deciding set, had not Alaina Thorne been a huge thorn at the net. The Stars got their attention.

“They played their hearts out,” Washington coach Brett Matteson said. “They sure didn’t play like their record.”

Well at first, they did. Washington was on its way to a sweep when the Stars suddenly, without warning, reversed the trend. Carlee Kern ripped off five straight service point for a 9-4 lead in Set 3, Brynlea Bennett hammered down three huge kills during a run midway through the game, and the Stars closed out their first set win since their lone match triumph over Indian Creek.

As much as Washington set the tone in the first two sets, BNL was the aggressor in the next two. The keys were obvious.

“Passing, our communication,” Robbins said. “These girls talk all the time to each other, it’s one big family. I don’t know what it is when we’re on the court. But that was the biggest difference. It was so much better in the sets we won. I’m proud of them for maintaining the leads and pushing.”

In the shorter fifth sets, played to 15 points rather than 25, the first move is usually the winning move. And that came from Washington as Williams found a hole with short serves and forced the Stars to scramble.

“We can’t start in that hole,” Robbins said. “Our aggressive serving led to mistakes and got them out of their standard offense. But then they were able to pass and come back at us.”

“Brynlea was a defensive machine,” Robbins said. “She was getting in her groove. Her confidence has not been there at all, but we were finally getting it tonight. She did a great job.”