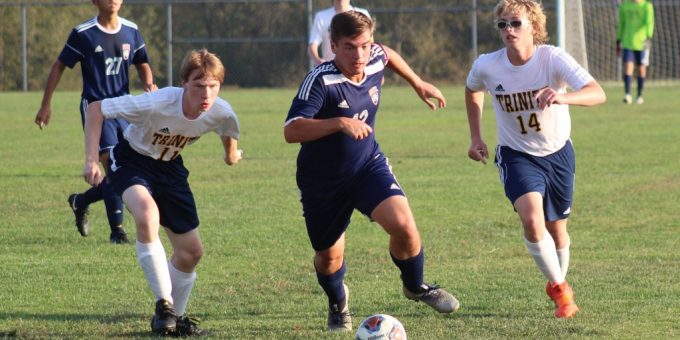 (BEDFORD) – The spotlight cast its wide glare on Bedford North Lawrence’s seniors, celebrating the six who will soon depart the program. They went out in style, spreading the wealth.

The Stars honored the upperclassmen with a 10-2 victory over Trinity Lutheran on Thursday afternoon. Jacob Kolk, one of the Senior Six, was among three Stars with two goals each as BNL (7-4-1 with three consecutive wins) outclassed the Cougars (1-9).

BNL scored with ease, staking an unchallenged claim to the turf in front of the Trinity net. Kolk, Danny Cline and Lakota Terrell all tallied twice, and four other Stars cashed in goals.

“We did what we’re supposed to do,” BNL coach Logan Jackson said. “We moved the ball well and we were aggressive. We didn’t have any lapses, so it was an all-around good game for us.”

Cline started the goal-fest with a point-blank header at 29:45 after Josh Anderson’s quick-touch was deflected by the Trinity goalie. Two minutes later, Anderson snapped home a Billy Cline pass to the center of the box.

Danny Cline deposited another header off a Seth Sherfick assist at 16:27, and the rout clouds started to gather. The downpour broke loose as Martel Flores looped a bad-angle shot from the right wing to the left post at 15:21, Terrell thumped home a header off a Jacky Zhang pass at 9:04, Terrell tickled the net again at 5:18, and Kolk made it 7-1 at intermission with his first at 2:31.

In the second half, Kolk (from Sherfick), Sherfick and Gavin Green all added goals.

“It’s always a fun night, especially when you do well,” Jackson said.

“They did a good job of leading, they know the expectations, and I know that’s tough,” Jackson said of his second four-year class. “They’ve stuck it out and gotten better every year.”

“It’s good inspiration,” Kolk said. “It’s good to win like that. Everyone is family, so it means everything.”

Micah Baumgartel (a penalty kick at 14:49 of the first half) and Sawyer Doggett (8:29 in the second) had the goals for Trinity.