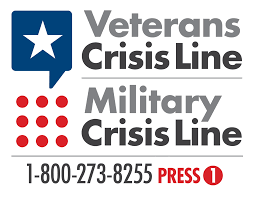 (BEDFORD) – Alarmingly, veterans comprise less than 9% of the U.S. population; however, they account for about 18% of suicides.

According to a U.S. Department of Veterans Affairs study, an average of 20 veterans commits suicide each day. That is 7,200 a year.

“We want to raise awareness on how you can protect yourself and your loved ones from this complex and tragic health issue,” says Lawrence County Veterans Affair Officer Brad Bough.

For serving men, suicide rates increased by 50 percent compared to those who never joined the military.

For veterans, crises can be heightened by their experiences during military service.

Specialists in the field from the VA Hospital in Indianapolis will lead the discussion.

If you’re a veteran or service member and in crisis, there are resources to help.

To reach someone right away you can dial a number and speak with someone, send a text, or just as easily start an online chat.

No matter what you are experiencing, there is support for getting your life back on track.