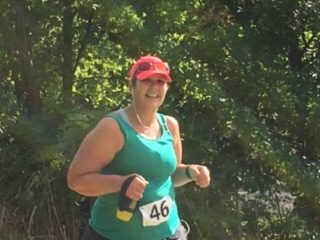 (BEDFORD) – The first Butch Fish Dam Run and Ride was held Saturday. It brought out 47 runners and approximately 10 bike riders, according to the Bedford Parks Department.

The event was organized by Jim Sowders and the Bedford Parks Department, in the memory of Butch Fish. Butch wanted some projects completed at Murray Park; the money raised from the event will be used for that purpose.

“It is a beautiful day honoring a great man. Putting his efforts in helping out the community, and it is heartwarming the community coming out and honoring him,” said Lindsey Fish Siewert, Butch’s daughter

Siewert traveled from Jeffersonville with her husband and children to be a part of the event.

“He taught his grandchildren how to be active in the community,” says Siewert.

His granddaughter Stella helped with constructing one of the bridges on the Milwaukee Trail.

“It made some special memories for me, I miss him,” stated Stella.

There where four water stops along the way, for the runners. Employees of the Bedford Parks Department, Park Board members, and volunteers helped with the event.

The course itself was approximately 10 miles from the starting point in Bedford, to just before State Road 450 in Williams. After the runners and bike riders completed their run they were served hamburgers, watermelon, and drinks.

The weather made it nice for the participants, and they enjoyed the wonderful scenery along the way.

The course didn’t take a lot of work to prepare for the event. Volunteers stepped up and fixed some places that had erosion on the course.