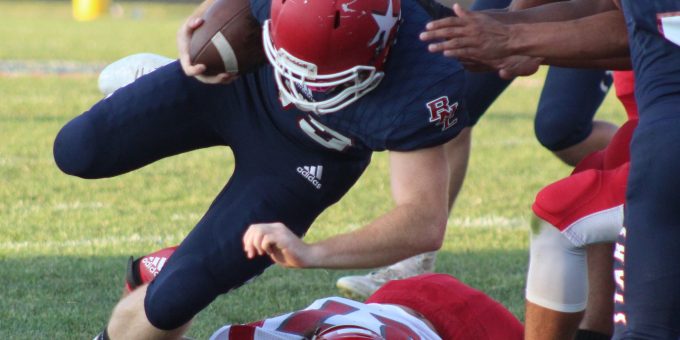 (BEDFORD) – Nobody could breathe. Madison coach LeRoy Wilson doubled over, drowning in emotion, and Bedford North Lawrence collectively got the wind knocked out of it.

Three yards, one point, all that separated a historic, supercharged, unforgettable victory, and a loss the Stars would like to forget but will not shake for some time.

The Cubs, languishing so often in the bottom tier of the Hoosier Hills Conference, so often a BNL victim during the course of the series, stopped a dramatic 2-point conversion with 34 seconds left to stun BNL 21-20 on Friday night, marring the Homecoming festivities and sending Madison into delirium for a supersonic ride home. Bet the bus wheels never touch the ground.

Down 14-5 late in the third quarter, Madison rallied for its first win of the season, the first for Wilson as its new head coach, and only the fourth ever against BNL. Wilson could hardly speak, as the moment washed over him and nearly knocked him to the turf.

BNL (1-3, 1-1 in the HHC) nearly tipped the scales of Justice in its favor as senior wingback Justice Woods almost – almost being the key – singlehandedly willed the Stars to a win. He ran for 167 yards, broke two huge runs, and caught the swing pass that got BNL to the edge of an improbable comeback win. But he was swarmed short of the goal line on the two-point attempt, and the Stars were left to suffer in their misery.

And there was a lot of that.

“I’ve never had more of a disappointment,” BNL coach Steve Weber said. “We’re so much better, so many guys that were so much better last year. We’re failing to do something.”

BNL failed to sustain offense. Woods blasted 79 yards for the first touchdown, snapped off a 21-yarder for the second, and ripped off a 52-yard burst late in the fourth quarter – with Madison’s Louis Humes making a clip-the-ankle-from-behind desperation tackle to momentarily save the touchdown. Woods got it on fourth down, setting up the do-or-die conversion.

Weber, even though the mythical football “book” states go for the tie at home, would do it the same again.

“I wanted to win the game,” he said. “I had already seen a kick blocked (after an earlier score). We have to get three yards, simple as that. I’ll make the same decision every time. Gotta win the game there.”

The Cubs might have actually won it earlier. Trailing by two scores after the second Woods touchdown, they engineered a draining 15-play, 80-yard drive to scramble within 14-13 with 10 seconds left in the third quarter.

On the next snap, Humes stepped in front of a doomed screen pass and raced 32 yards for a pick-six touchdown. BNL was in trouble. When BNL’s next drive ended with a fumble, the Stars were in trouble. When Madison’s next drive was kept alive by an unfathomable unsportsmanlike penalty on a member of the coaching staff – as the Cubs had called timeout to set up a punt – and the Cubs ate away another 2 1/2 minutes, they were in deep trouble.

Yet here they came, with Woods bolting into the clear, with Woods snagging the swing pass and jaunting into the end zone untouched. BNL went for two with a loaded-up right side of the offensive line, but Madison held firm.

Once he caught his breath, thanks in part to the shock of cold water dumped on him by jubilant players, Wilson just shook his head when recalling all the changes of fortune.

“I’ve never been a part of a game like that,” he said. “That was awesome. They played their hearts out. Absolutely no quit whatsoever. We talked about that little hump. We finally got over the hump in the second half.”

Frankly, in the first half, better football was played by the unsupervised kids behind the grandstands than on the turf in the stadium. Madison took a 2-0 lead when the Stars were called for holding in the end zone – a automatic safety – and then went in front 5-0 on Will Heitz’s 32-yard field goal midway in the third quarter.

Back came BNL, finally, with Woods roaring the distance. BNL’s Cade Flynn recovered a fumble on the next series, when set up the second Woods score.

“Those dudes didn’t quit,” Wilson said. “They wanted it, too. We coached up focus and finish. We expect them to come back and swing.”

Madison quarterback Parker Jones was 18 of 26 for 188 yards. Running back Trenton Barnes had 90 yards rushing and the first touchdown. He also caught 5 passes for 33 yards, while Humes grabbed 4 for 47.

BNL managed only 7 first downs, unable to consistently move the ball in small chunks rather than big bursts.

“We can’t operate right now,” Weber said. “Too many misfires, too many mistakes. When you can’t get a drive, it’s hard.”

Blame it on the convergence of Friday the 13th and the full moon, but Madison (1-3, 1-1 in the league) ended BNL’s five-game winning steak in the series.

The Stars will visit Seymour next week.