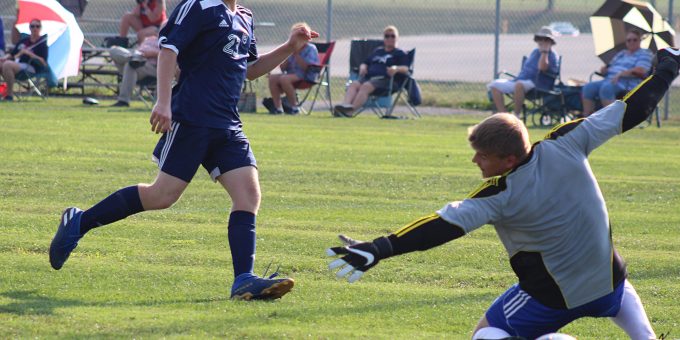 Terrell scored twice in the second half as the Stars carded their first Hoosier Hills Conference win of the season on Thursday afternoon, cruising to a 3-0 victory over Jennings County.

Josh Anderson’s breakaway gave BNL (5-4-1 overall, 1-2-1 in the HHC) a 1-0 lead at the half, and Terrell connected twice on tremendous passes from the wings to the goal mouth. Those goals are why soccer is known as the “beautiful game.”

Perfect place, perfect time. Terrell’s first goal came off an Anderson pass with 27:54 remaining, and his second was the prettiest. Billy Cline, at full speed, ran down a ball that seemed destined to bounce out of play in the far right corner. Not only did Cline reach it, he twisted and ripped a pinpoint pass to the front of the net, where Terrell awaited and redirected with 13:24 left.

“We were trying to send it in from the outside, because we were playing too much in the middle,” Terrell said. “Coach said to lay it on them, give it all we had.”

Anderson’s early goal came in shocking manner as Uly Mullis lofted a pass from midfield, the ball soaring over a gambling defender and into open space. Anderson won the race, dribbled into point-blank range and slipped the shot past JC goalie Braidon Foster at 31:52. But from that point, the Stars – even while controlling possession and maintaining pressure – went silent.

“We had some times where we let up,” Jackson said. “I’d like to see us create a little more in the final third. We just sat back and expected it to come, we didn’t press anything or try anything new. There was no movement.

“But we scored when we should have, It’s a conference win, so take it.”

“That was one of the better things we did,” Jackson said. “We switched the ball back and forth in the midfield. That got us a lot of different looks. And we kept possession. That just wears you down.”

The Panthers (1-9) played a rugged style and got whistled for 10 fouls. Their best scoring chance was a penalty kick with 14:34 left that Nathan Davis sailed high and wide.