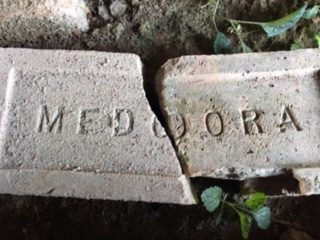 (MEDORA) – The Medora Brick Factory was founded on August 2, 1904 as the Medora Shale Brick Co. The name was later changed to Medora Brick Plant and they started producing brick in 1906.

A 50-man workforce once produced 54,000 handmade bricks a day at the plant.

The Medora Brick Factory is located just Southwest of the Town of Medora in Jackson County.

There were a total of 12 brick kilns on site. In addition, the property had several buildings that were constructed on the site which included an office, brick drying building, and some storage buildings.

The brick factory produced brick used for paving streets. But the company faced financial hardship which forced them into bankruptcy.

In 1924, the plant was purchased by Jackson Brick and Hollow Ware Company, who operated in nearby Brownstown.

The operations of the company began to produce wall brick for building facings on college campuses including Purdue University, the University of Kentucky, University of Louisville, and many others throughout the state of Indiana.

“I worked at the plant performing just about every job there was in the plant,” said Marvin Reynolds. “Setting brick, wheeling the brick, and I drove a truck. The shale rock and clay around the brick plant was used to produce the brick.”

In 2016, community members around Medora took up the effort to preserve and restore the brick plant.

Following environmental studies, the group started working on the property. They cleared out the area of trees that formed throughout the property and worked to uncover the brick that was used as the parking lot and pavement over the years, according to Tim Reynolds who is one of the members of the group.

With the 501(c) 3 status, the group could start applying for various grants. Local companies have partnered with the group and have performed various work on the site which includes running electricity, getting water ran for outside water sources, and work has begun on the inside of the office. Toen Electric ran the need electric lines, Rabb Lighting provided a grant to the group, and the Jackson County Community Foundation has given the group at least two grants. In addition, the Jackson County Visitors Center has provided some guidance and assistance to the group.

There is plenty of work yet to be done in addition to needed financial support for the effort. Fundraisers are normally held around Memorial Day with the organization hosting a cookout, vendors, and music needed to help raise money for the group.

A joint fundraiser will be held on Saturday, September 28 for one of the organizers who was diagnosed with breast cancer. The Lynn Cowles Benefit will be held at the Medora Brick Plant.

Music, Food, Art & Craft vendors will be on-site to help raise money for the cause. Some of the bands include The 4G Band, Sureshot Turkey Dusters, Jerry & Amber Henson, The Dark Hollow Duo, and the debut of Twisted. In addition, there will be games for the kids, cheeseburgers, hot dogs, BBQ, and homemade sides and desserts will be available for purchase. Sporadic live auctions will be held all day long.