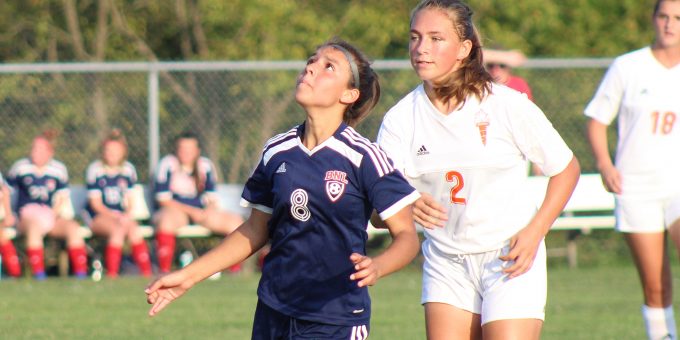 (BEDFORD) – Jennifer Ramirez got the shot launched in time. If soccer had instant relay, like college basketball, there’s no question she cracked that 25-yard blast before the scoreboard clicked all zeroes.

But soccer has different rules. The ball has to be in the net before the horn. And there’s no question that drive splashed into the back of the net after the buzzer. Just a half-second. Might as well have been an hour.

Bedford North Lawrence was a split-second late and four goals short as Columbus East scored on time during a 4-0 victory on Tuesday afternoon.

The Stars trailed 2-0 when Ramirez finally found open space on the left wing as the clock evaporated to end the first half. She fired with 0.5 seconds left, and that rocket roared into the goal like a heat-seeker ripping into a terrorist bunker. But it didn’t count, and BNL could have used that lightning bolt of momentum.

Instead, East scored quickly in the second half and erased any chances of a BNL upset.

“It was a little deflating,” BNL coach D.J. West said. “But it’s not basketball, where once a shot goes up. Once the whistle blows, if it’s not in the net, it’s no goal. And we really didn’t threaten after that, which was disappointing.”

The Olympians (3-3-1 overall, 2-0 in the Hoosier Hills Conference) didn’t score until late in the first half. Alana Dwenger deflected home a rebound in front of the net at 6:40, and then set up Gabriella Schuetz for a long-range goal at 4:50.

Dwenger struck again with 38:29 left in the second half, and Maya Federle added the final goal, cutting through defender and taking a pinpoint pass from Jaeda Berkemeier with 28:45 left.

“When we play at our level, connecting on our passing, we can play a very high-level game,” East coach Ilya Schwartzman said. “That’s a good score, but we left some goals unfinished. The result is good, we’re obviously happy with the outcome, but it would have been better to finish all the opportunities we created.”

East had too many chances, with a 20-2 advantage in shots.

“We changed some things up defensively, didn’t play as high on the back lines and tried to get Jennifer in space,” West said. “We’re still giving up some easy goals, and we’re trying not to give up the breakaway goals. We’ll build on that. Hopefully we can be competitive and get a win soon.”