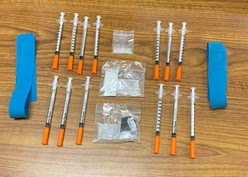 (CLARKSVILLE) – On Monday, Indiana State Trooper Tate Rohlfing made a traffic stop for driving left of center. That stopped landed the driver in jail on drug and other charges.

At approximately 3:45 p.m., Trooper Rohlfing observed a Ford Mustang drive left of center on Randolph Avenue and initiated a traffic stop for the violation.

The driver, 37-year-old Rachel A. Wiggins, of Sellersburg, was found to be driving with a suspended driver’s license and was traveling with a young child in the car.

Further investigation lead to the discovery of methamphetamine, numerous syringes, and drug paraphernalia.