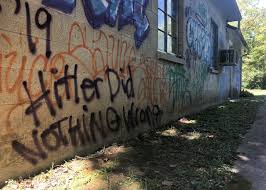 (ELLETTSVILLE) – Greg Silvey, 25, of Bloomington, a second person of interest was arrested in connection to Old Dutch Church’s vandalism on Thursday.

They are seeking a second suspect.

The incident happened between 9 p.m. and 11 p.m. Monday night.

Deputies went to Prince’s home and saw an older model Ford Taurus matching the description of the one spotted on surveillance video.

Deputies conducted a traffic stop and arrested Prince; a search of his vehicle turned up 12 cans of spray paint.

He was arrested on charges of criminal trespass and criminal mischief.

Investigators believe they know the identity of the other man seen in the surveillance footage. They’re trying to locate him and said they’ll release his name once he’s arrested.

“As you can see, it’s very unnecessary and disrespectful in my opinion,” he added.