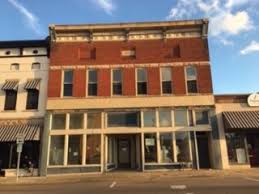 (BEDFORD) – The Bedford Board of Works met in a special meeting today at Noon to approve an Inter-Agency agreement with Indiana Landmarks, receiving the quitclaim deed of the property, and approving the payment of tax liens for the Goff Refrigeration Building in downtown Bedford.

The property is located at 1018 16th Street in Bedford.

An agreement with the Lawrence County Auditors Office will allow the payment to be made once the deed is received by City Attorney Greg Pitman.

The cost to raze the building was estimated at $250,000 so city officials voted to save the historic building.

Goff Refrigeration was dissolved and ownership of the building transferred to the shareholders which included Zachary A. Clouse, Kelsey B. Clouse, and Shelby Clouse. The building was condemned by the City of Bedford in September of 2016 after many safety issues of the building were discovered.

Bedford Federal Savings would not loan any more money to repair the structure, and a loan was written off by the bank.

Greg Sekula of Indiana Landmarks was asked if they were interested in partnering with the city in preserving the building.

Indiana Landmarks will identify three areas they can salvage to keep the building structurally sound until a buyer of the building can be located.

To date, Indiana Landmarks has completed Phase I of environmental studies. Once ownership of the property is transferred and the payment of $250,000 is received from the City of Bedford, a Phase II environmental study will begin.

The building was once an auto dealership and that is why a second environmental study must be completed.

The Board of Works also approved an amended payment of the tax liens set at $13,381.92.

The Bedford City Council will meet at a later time to transfer funds to help pay for the restoration project.