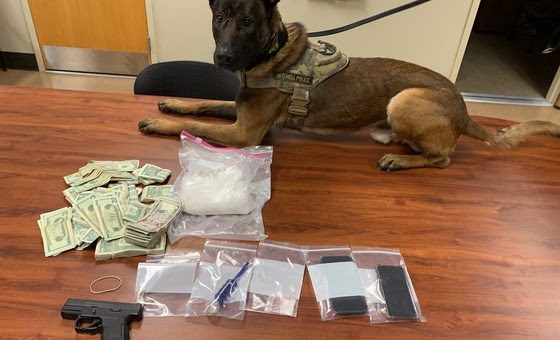 Information gathered from the investigation further showed that Hobbs was supplying meth in Monroe, Lawrence, Greene and Morgan Counties.

Trooper Chris Griggs was assisted by the Lawrence County Prosecutors Office Highway Interdiction Team (HIT) member and Mitchell Police Department Officer Shaun Cabral and his K-9 “Jack” during the traffic stop. The driver was identified as 32-year-old Jennifer Dotson, of Bloomington, and the passenger was identified as Hobbs.

Inside the vehicle, troopers located more than 2 pounds of meth, heroin, a firearm and a large amount of US Currency.

Jennifer Dotson was arrested on charges of dealing meth over 10 grams, and possession of meth over 28 gram