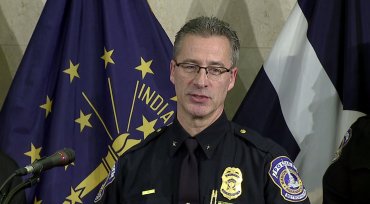 (INDIANAPOLIS) — The Indianapolis Metropolitan Police Department has placed an officer on administrative leave after a video shared on social media showed him striking a 17-year-old boy during a confrontation outside a school.

IMPD took the action Friday a day after officers were called to Shortridge High School to assist school police handle a large fight.

Indianapolis Police Chief Bryan Roach says it was not “reasonable” for one of his officers to punch a teenager in the face during a confrontation outside a school captured in a video posted on social media.

The Indianapolis Star reports Roach said in a statement Saturday, “The video shows a clear image of a closed fist punch to the face, a technique which is not taught or reasonable given the facts known to us at this time.”

Roach said the officer has been suspended without pay and the incident is being investigated internally. The officer’s name hasn’t been released. He was among officers called to Shortridge High School on Thursday for a large fight. The video shows the black 17-year-old boy falling to the ground. The officer is white.

The officer is white and the boy is black. The officer’s name hasn’t been released.

The boy struck by the officer has been suspended for five days. The Indianapolis Star reports a police report says a 17-year-old boy was arrested on preliminary charges of resisting law enforcement and disorderly conduct.

Indianapolis attorney Terrance Kinnard says he has been retained by the family of the boy.