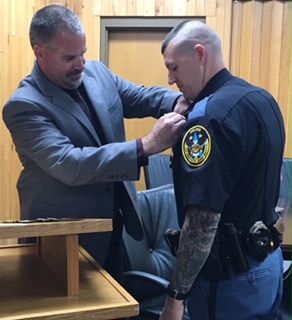 “ I am happy for him. He deserves it. He loves his work, ” said his grandmother Lynn Duckett following the ceremony.

Police Chief Shirley placed his badge on his uniform, and Lt. Ducketts wife, Tamara, and son, Leo placed pins on his collar during the ceremony. Several members of the public and fellow officers congratulated Assistant Chief Duckett on his promotion.