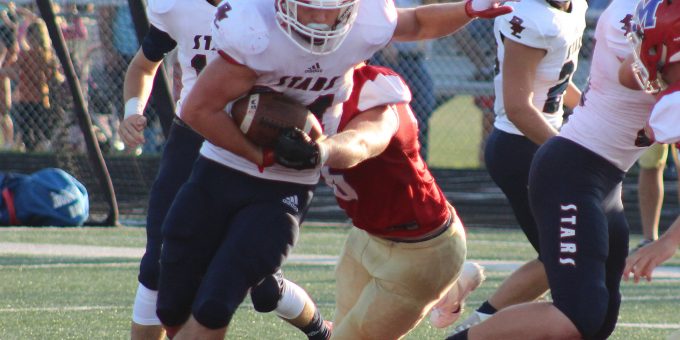 (BEDFORD) – In this instant-notification, immediate-gratification, super-charged, wired world of today, patience is not normal. Everyone wants everything, without much effort, and now isn’t soon enough.

So here is Bedford North Lawrence football, two weeks into the 2019 campaign, and it seems all is lost. Lackluster scrimmage, humbling opener, followed by wailing, teeth gnashing, wagon bailing, and disaster alarms. That’s a knee-jerk reaction for a situation that requires a cool-head approach.

The Stars are 0-1 – not unusual the last decade – following the 40-7, time-shortened setback at Martinsville. That cannot be changed. Time to panic? Don’t forget, BNL lost last year’s opener before proceeding to win seven straight and earn poll points.

This team should not be compared to its predecessor. These Stars lacked some urgency during the offseason, when sweat precedes success. They have it now, shaken awake by a mercy-rule beatdown.

BNL’s next opponent comes from the opposite corner – fresh from victory, motivated by recent struggles rather than content from prosperity, eager for vengeance. Bloomington North started this season with a 33-13 win over Greenwood, and these Cougars have more bite than before.

North is smiling, BNL is gritting teeth, now in fix-it mode to resolve exposed issues. But there is no quit.

“We can definitely have a better year,” BNL coach Steve Weber said “I’m not saying we beat that team (Martinsville) even if we played perfect. Sometimes you’re outmatched in a game, and that might have been the case. That’s a hard opening game.

“But there’s a ton of mistakes we made that I know, for a fact, are fixable. You never give up and I hope the guys are buying into the fact we’re working toward the sectional. It will take some time.”

BNL’s work is across the board. The defense broke down for big plays, the offense missed assignments and had three turnovers, the special teams surrendered a score last week. The challenge ahead is no easier, in fact very similar.

North will feature sophomore quarterback Reece Lozano, who completed 20 of 31 for 166 yards and a TD against the Woodmen, and running back Xavier Trueblood (77 yards, two TDs). Bailey Murphy (10 catches, 100 yards) is the top aerial target. North’s defense mirrors BNL’s in scheme.

“They’re good,” Weber said. “He throws the ball pretty well and they’ve gone to a spread, similar to Martinsville. They run the ball well, throw the ball well, and the quarterback is mobile.”

The Stars don’t have the firepower for another shootout.

“There’s a lot to fix,” Weber said. “I do think we got better last week, but we’re still in wrong gaps on defense, alignment is a problem. Offensively, we made a ton of mistakes on assignments, but those are all things you can fix.”