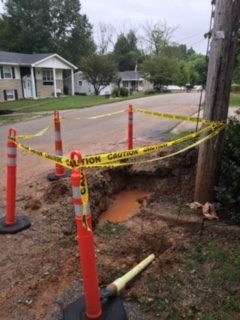 (OOLITIC) – The Town of Oolitic survey was approved.

Michelle Carrico from Southern Indiana Development Corporation and Drew Flammion from CommonWealth Engineers provided a brief update on the grant.

Due to financial issues, Oolitic Town Council members have identified at least five priorities that will be addressed with this grant funding. In 2017, there were more than 17 areas that needed attention.

The areas targeted are:

The improvements include adding guttering, curb cuts, and culvert replacements.

The council voted to purchase a pick-up truck or dump truck if one becomes available for $10,000 or less. Attorney Greg Pittman advised the council that since the purchase was below $50,000 that bids do not have to be submitted before purchasing the vehicle.

Officials are still looking to fill a vacancy at the Oolitic Water/Street Department. There are currently only two full-time employees, and one part-time employee working to keep up with the workload. Workers are currently about two months behind on projects due to weather issues.

The council voted on an ordinance stating all employee vacation time must be approved by their immediate supervisor. Clerk-Treasure Jessica Staggs must also check to see if the employee has the time allotted to take off before their supervisor can grant the vacation. The council can be notified about the vacation, but is not required.

However, the ordinance did not pass by a majority vote and will go before the council again for final passage at their next meeting.

Councilman Glenn Gross suggested safety vests and better signage were needed at roadblocks conducted in the town. Gross says ABATE uses good vests and signage and suggested other organizations due the same. The measure passed by a 4-0 vote.

Kevin Hutchinson of UAW 440 requested to do a roadblock on February 21 to raise funds for Dogs for Heroes. The group provides service dogs for veterans. The council approved the request.

Jeff Reynolds asked the council to approve a business permit. He is leasing the former dentist office and will be opening a restaurant in the near future. Reynolds is making improvements and equipment upgrades to the building. Council approved his request and welcomed his new business.

Bill Tolbert asked the council about issues with abandoned vehicles and yards not being kept up and wants something done about it. The council advised Tolbert that they addressed the issue in the recent passage of an ordinance and officers have been tagging vehicles. The town has also sent out notices to those who are not upkeeping their property.

Leah Gross asked if Oolitic will continue to have Town Conventions or if the future administration will decide if the Town of Oolitic will return to districts. President Bill Kendall stated the decision would be made following the 2020 Census and the next administration.

Gross also asked if the new cameras installed in the meeting room would be used to stream meetings live. Kendall stated they would not be used for that purpose.

Bob Ball addressed the council about the property located in the 500 block of Smith Avenue. He stated the grass is overgrown. The council said they will send someone out to look at the property and address the issue.

Residents will not have any late fees for water/sewer if paid prior to August 19. This was the suggestion from the State Board of Accounts following the water bills getting lost at the Post Office Processing Center in Indianapolis.

Bids were received for roof repairs at the Water/ Treatment Plant. The council voted to accept the proposal from Martin Roofing to seal coat the roof for $1,142.45. The other bid was for a complete roof repair from Five-Star in Hartford City, Indiana. The bid was for more than $6,400.

The council discussed repairing fire hydrants. There are four fire hydrants that are in need of repair. The hydrants at Sixth and Oak Streets and the one in front of the Dollar General Store were the most concerning. Those hydrants will need to be replaced. The cost will be around $9,000.

Fire Chief Ted Maze assured the council that contingency plans are in place if there was a fire in those locations. Firefighters would run hoses to other hydrants in the area. The Council voted to allow further research in finding parts to repair the hydrant, that would cost the town $5,794.

Councilman Gross asked about the damage on 11th Street. The street was damaged during construction of a new home. Town Attorney Pittman stated more investigation is needed on the matter before any letters or action is taken against the company.