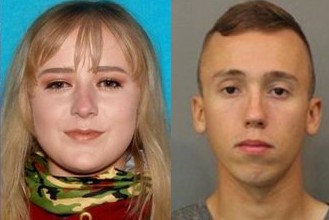 Eddlemon is in extreme danger, police said. She’s 5’1″ inches tall and weighs approximately 97 pounds. She has blonde hair with green eyes. She was last seen wearing a black hoodie with white tribal writing and blue jeans with shin high boots and a black lace choker.

Police say 22-year-old Alexander Martin Curry-Fishtorn is a suspect in the case and and is wanted. Fishtorn is a 5’7″ and weighs approximately 158 pounds. He has brown hair and brown eyes. He drives a grey 2009 Chevy Cobalt with license plate number 645RIS.

Crowne Point is about 138 northwest of Indianapolis. Eddlemon was last seen on Saturday, August 17, 2019.

The Lake County Sheriff’s Office is investigating her disappearance. Anyone with information regarding the whereabouts of Madison Elizabeth Yancy Eddlemon is asked to contact police at 911 or 219-660-0000.