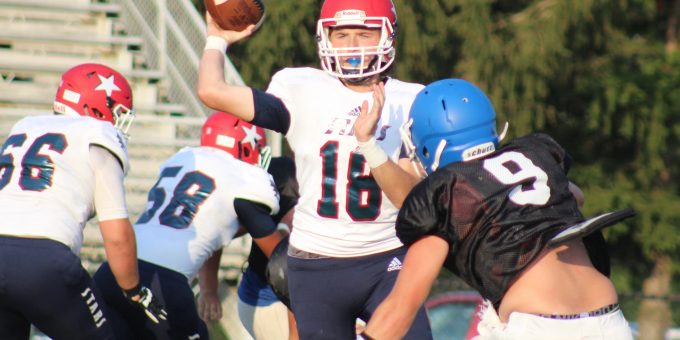 (BEDFORD) – Nobody keeps an official score, and that’s a good thing. Because there’s no question, none at all, which team “won” the IHSAA sanctioned scrimmage between county rivals.

No matter the scorecard or measuring standard, whether by touchdowns, execution, glaring mistakes or the subjective eye test, Mitchell emerged from this annual glorified practice session with far more positive vibes. Bedford North Lawrence, on the other hand, suffered a public, humbling beatdown.

The opposite was expected. Mitchell had a grand total of 28 athletes on the roster, an offensive line that had at least two freshmen and one sophomore at any given time, and Mitchell coach Troy Pritchett feared the worst. Instead, he got the best.

The Bluejackets, displaying versatility, backfield speed and aggressiveness, scored six times during the three lengthened varsity sessions., three during the goal-line work and three with a head start from the 35-yard line. The Stars had more major penalties than touchdowns – never a good sign.

Thankfully, this won’t be reflected on the record. But it was definitely an alarm bell, chiming to end the preseason and start the countdown to the season opener. The Stars got jolted with a mouth punch.

“A lot of work,” BNL coach Steve Weber said to start this postgame critique. “A lot of mistakes, a lot of non-aggressive play, a lot of everything bad. We’ve got work to do. The concerning part is a lot of it is stuff we’ve done for a long time.”

“Nothing,” Weber said. “That’s a shame. I was looking for backups, didn’t see any rise up. I was hoping the defense would shine a little bit, considering the work we put in it – didn’t show up.”

Mitchell’s momentum and following dominance started with the final two plays of the goal-line work, touchdowns by Luke Lefevor (an 8-yard catch from Dane Pritchett) and speedster Nathan Reynolds (10 yards around the outside). The Bluejackets exploded during the final 12-play series, adding touchdowns from Dorian Duncan, Reynolds (another 18-yard bolt on the perimeter) and Reynolds again (a 43-yard bomb from Lefevor).

Notice the passing connections? Pritchett usually calls a pass play as often as a governor calls in a death-row pardon. Yet here was Mitchell firing it all over, hitting 8-of-12 for 121 yards. “That’s probably the last time we throw all year,” Pritchett said with some Lou Holtz poor-mouthing.

The Bluejackets totaled 246 yards during their 37 snaps, with kids who can’t yet drive a car providing the engine for the offense.

“Our young line, that’s been our big focus,” Pritchett said. “They probably gained some confidence from this. It gives us some momentum, to put some fires under our tails to have a different attitude toward varsity football.”

BNL did not get shut out. Justice Woods scored from 3 yards during the goal-line series, and Skyler Bates blasted over from 6 yards. But BNL’s only score from distance was Dalton Nikirk’s 36-yard strike to Woods in the final series.

The Stars were in scramble mode, thanks to a severe knee injury to starting senior center Reagan Bowman during Thursday’s practice. Jacob Hall was inserted for the emergency start. That wasn’t the problem. Six flags, a fumble in the red zone and a dropped deep pass were.

Duncan had 54 yards rushing while Pritchett caught 4 passes for 35 yards for the Bluejackets.

“We don’t take this as a game at all,” Pritchett said. “With our numbers being low, and guys learning three of four positions, we wanted to get them in a lot of different spots. I was scared to death coming into this thing.”

Those fears should be calmed as Mitchell heads into the season opener at Edgewood on Aug .23.

BNL, now worried as major issues were exposed, will visit Martinsville for its 2019 debut.