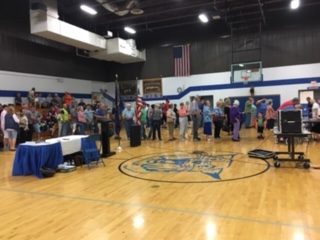 (OOLITIC) – The Clerk-Treasurer and five Republican Town Council candidates will move on to the November election.

There was 196 eligible Republican voters cast ballots during the Republican Convention in Oolitic Thursday night.

More than 300 people attended the convention. Those attending were from Bedford, Springville and the group also included other Oolitic residents.

It took several minutes to get voters registered and verified that they were eligible to vote. The rules of the Convention were set by Indiana Statue as well as Republican Party Rules. Rules for the Convention can be found under Indiana Code 3-8-5-12.

Because of misinformation over social media, and being the first Convention in Oolitic in many years, Chairman of the Convention Amanda Mitchell read the rules to the crowd before the candidates began speaking.

The Chairman also asked the group whether they could suspend the rules of allowing each candidate to speak for five minutes allowed by statue and have candidates speak for three minutes. The crowd overwhelmingly supported suspending those rules.

Chairman Amanda Mitchell, Secretary Erin Edwards and Ray Lindsey were in attendance on behalf of Chris May should there have been any additional questions or issues.

The Convention ran smooth other than dealing with the warm temperatures inside the gymnasium.

Each of the candidates were given three minutes to speak. Only Steve Louden chose not to address the crowd.

The first candidates to speak where Clerk-Treasurer Candidates Jessica Staggs and Leah Gross. The candidates were given preference by who filed first in each of the races.

Each of the candidates spoke about themselves and the vision they saw for the Town of Oolitic.

Following the candidate’s introductions, the voting started and the final vote tallies were given around 8:45 p.m.

Here are the results:

Here is the reaction that we got from some of tonight’s winners of the Convention.

“ I am thrilled and happy to continue to serve the people of Oolitic. I will continue to live and work in Oolitic,” said Clerk-Treasurer Jessica Staggs .

“I am thankful to the Lord for the way it worked out. We should not look to the left or right. But, everyone starts working to make Oolitic a better place to live, work, and play. Try to work to bring business back into Oolitic,” said Dirk Sears of the Oolitic Town Board.

“Dad always said if you cannot do big things, always try to do several small things to help someone out. glad, to be able to serve the Town of Oolitic,” said John “Bob” Dillion.

“We had to move forward with the storm/water improvements. There were several leaks that we discovered when looking at our storm/water issues. And we had to pass the 42 percent water rate hike to make improvements to the system. I will continue to work at improving our roads and water/sewer issues. Pleased with the results,” said Bill Kendall.