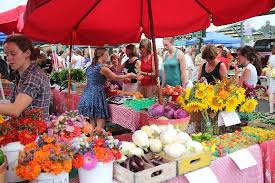 The Bloomington Farmers Market was suspended for two weeks due to public safety concerns. The City of Bloomington wanted what they called a ‘cooling-off period’ and to also find a way to address public concerns.

Mayor Hamilton is expected to make an announcement on Tuesday regarding the market’s fate.

The market suspension centered around the protest of a vendor. The vendor has been accused of being a white supremacist. However, at this time, this is only an accusation that has not been substantiated.

Beverly Calendar-Anderson, director of the Community and Family Resources Department, received and posted viewer questions to Mayor John Hamilton and Paula McDevitt, administrator of the Department of Parks and Recreation, who operates the market.

During the question and answer question period the mayor emphasized that the city wants to promote a safe, civil, and just city, especially around the market place.

The farmers market has been in existence for more than 45 years, according to the city officials

This year the market has seen a decrease in participation. In July 2018 the market saw more than 40,000 people attending. That number has decreased to around 19,000 in July 2019.

The market is a place where residents could buy a variety of produce and hot foods, listen to music, as well as have a place to carry on dialogue on political matters.

In July, a controversy began over allegations that one vendor was involved with white supremacy which then brought three other groups into the fray. No Space for Hate, ANTIFA Members, and Three Percenters are those three groups.

According to the mayor, both sides have instilled fear in the community.

Mayor Hamilton publicly stated, “There is no place for hate and as a city, we must condemn all levels of discrimination based on race, age, gender, and disability. We want to make Bloomington a welcoming community, and we have grown in size over the last several years because we are  a diverse and welcoming community.”

Mayor Hamilton also stated, “State legislators have limited us in how we can restrict the carrying of firearms onto public property such as the Farmer’s Market. The carrying of weapons such as knives and guns is a concern of the city. However, there are severe civil penalties if we limit those carrying firearms on public property except for schools, hospitals, and Indiana University who can limit them.”

Private property owners can limit whether people can carry weapons onto their property. The city may look at moving the Farmer’s Market onto private property. City officials have emphasized that no decision has been made at the time this story was published.

Mayor Hamilton is urging state legislators to take action, stating this was a reckless piece of legislation, especially since the mass shootings that have occurred in recent weeks across the United States.

On the day that protestors were arrested at the market, members of the Three Percenters were seen carrying knives and guns on site.

Some individuals have taken issue with the mayor on several grounds, including Robert Hall from Grass Roots Politics.

“The protestors [are] intimidating customers as well as vendors in the market,” said Hall. “Protestors were wearing masks and interfering in the commerce of the market. The Mayor has yet to address the vandalism along the B-Line Trail, to which he had never responded to.  The city has allowed the bullying of this vendor, and there is no evidence to support what this vendor has been accused of.”

The City of Bloomington has held two public meetings since the controversy began, and the Facebook Live Discussion took place on Monday. The city encourages residents to continue to attend meetings both of the City Council and the Bloomington Parks and Recreation Department.

The dialogue on Monday centered around getting other viewpoints without drafting policy. Officials say that they will be looking at all of these matters as time progresses and when the Farmer’s Market closes for the season in November. After the market closes, they will look at what happened over the year and try to address those concerns.

The Mayor and Bloomington Parks and Recreation officials did not hint of any changes during the hour-long session.

A protestor named Cara Caddoo was arrested two weeks ago when she would not leave a vendor space in the market. Officials say that there are places within the market that people can go and protest.

On Monday, during the Live Facebook discussion, Caddoo responded with this statement:

“Mayor, I know you have watched the videos of my presence at the Farmer’s Market (at least the one that was sent to the Mayor’s Office immediately after my arrest.) You saw that I remained peaceful during the entire time I was there. I only spoke to those who approached me first. I did not block or prevent anyone from purchasing goods from the vendors; I did not engage in tumultuous contact; I did not incite violence; I did not encourage an unlawful behavior,” said Caddoo.

Schooner Farms has been a vendor for more than six years, and according to city officials, she was allowed to remain because she has not violated any terms of her contract at this time.

Vendor Sarah Dye stated, “All I want is to sell produce.”

Last week, the Farmer’s Market took place at the old K-Mart lot. Many other farmers markets throughout the area, including Bedford, have offered vendors a place to sell their goods.

The three groups that have led the protests include No Space for Hate, ANTIFA, and the Three Percenters.

The ANTIFA movement is composed of left-wing, autonomous militant anti-fascist groups, and individuals in the United States. Their principal is their use of direct action, with conflicts occurring online and in real life.

Three Percenters are composed of the America Militia Movement Group whose members pledge protest and armed resistance against attempts to curtail against constitutional rights. The group formed back in 2011.

Mayor Hamilton told residents to stay tuned for a press conference onTuesday to see where the Farmer’s Market goes from here.