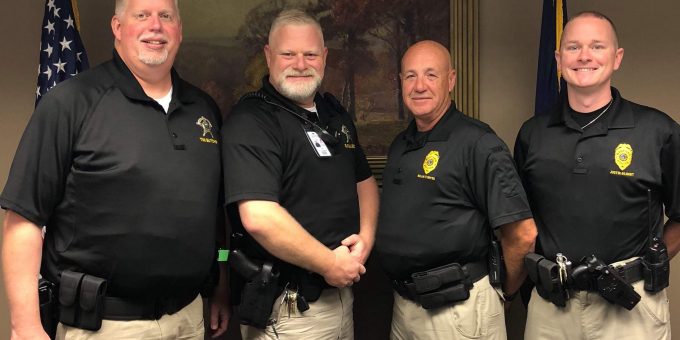 (BEDFORD) – In their second year, North Lawrence School officers have built a rapport with student and parents.

“All of our officers have attended the extensive training for a School Resource Officer,” says Major Greg Taylor of the Lawrence County Police Department. “This includes firearms proficiency, as well as other Law Enforcement Training they must maintain skills on. When they are not at the schools, they return to the road in the summer.”

“We try to send them to a School Resource Officer Training, or seminar every year to stay up to date on the latest trends affecting schools,” added Taylor.

The National Association of School Resource Officers taught the Advanced School Resource Officer Course at the 2019 National School Safety Conference in Pigeon Forge, Tennessee. The conference, held at the Leconte Center in Pigeon Forge, is a combined effort with the T.N.S.R.O. And N.A.S.R.O. The courses are held at the Music Road Conference Center.

“The courses keep us informed what is going on throughout the United States, and help us stay up to date on the latest trends,” said Brian Turpen of the Bedford Police Department.

“School Resource Officers learn how to interact with students, faculty, problem-solving, and deal with issues they may come across daily. Each day is different; the first thing I try to do is go through the school every morning before the students arrive. Make sure there is nothing out of the ordinary, and make sure the school is secure before the teachers arrive,” Turpen added.

“We monitor the unloading of the buses and students as they come through the doors to make sure everyone is doing all right,” Turpen added. “Throughout the day, we address whatever the school may need; we work together as a team and handle the situation as it develops. If it is a school issue, then we let the school address it. However, if it becomes something that law enforcement needs to be involved in, then we are notified. There are times we both deal with the issue if it requires school discipline as well as a law enforcement action.”

All of the School Resource Officers report that one of the most significant issues is vaping, and being caught doing so has consequences.

“The fine is $135 and the student is cited into court for tobacco use,” said Turpen. “But, besides giving the student a fine, we try to instruct them and help them learn from their mistakes.”

“We normally average at least one or two incidents a week,” according to B.J. Fulkerson. “Those incidents can be anything from vaping to another type of criminal activity. However, our role is only ten percent of law enforcement. We do a lot of other things, such as safety planning, reunification, interaction with students, and mentoring.”

“More than 95 percent of our students are good without causing any trouble, or having any issues,” said Tim Butcher.

“I have done some teaching on the Fourth Amendment, or maybe go into a health class,” said Turpen.

“I have been invited to a math class to let the students know how important math is in our jobs. Math is used in traffic reconstruction, and how we measure skid marks to help in the investigation of a traffic accident,” said B.J. Fulkerson.

Butcher added, “Science class is used in law enforcement such as forensics.”

Officer Butcher and Fulkerson state they would like to see the North Lawrence Career Center develop programs in Public Safety for students such, as fire science, law enforcement, and emergency medicine.

“It will be great to encourage students in these fields,” said Fulkerson.

Every School Resource Officer stated that their interactions with students have been enjoyable experiences so far.

“Parents and the students both now are expressing the appreciation of our presence,” said Butcher. “Many of the officers attend school event, and other school functions both in uniform and out of uniform. The students come up to us and interact with us.”

All the officers try to attend school and community events and keep communication open with the public.

Officer Turpen used a drunk google demonstration during a school convocation to teach students what it is like to drive impaired at the high school health class.

“We try to teach them that there are consequences to some of the behaviors they do,” he added.

All the resource officers stated how humbling it is to be a role model for the students. Attending several public events throughout the year and getting the responses they get from both the students and parents means a lot to them.

Brian Turpen said he was up at the Judah Heritage Festival and had students coming up to him, letting him know how their summer was going.

“This has been a gratifying job. And will hopefully have a positive impact on many lives,” he added.

Change in the D.A.R.E. Program

Taylor served in the role for more than eleven years, teaching students the D.A.R.E. program in 3rd and 5th grades.

Now, Tim Butcher will fill the role as the new D.A.R.E. Officer.

“It is a great memory to be a part of the program. And I hope that I helped someone along the way,” added Taylor.

Tim Butcher has already received his training to be able to teach the program.

The D.A.R.E. program has changed recently. It now also deals with social media issues, bullying, as well as lessons on opioids, and over the counter drug use.

Butcher completed more than 80 hours of training to teach the program and is excited to be in this new role as well as being a school resource officer.

For more information visit the North Lawrence Community Schools D.A.R.E. and SRO page. If you have an incident or concern the Bedford Police has a form where reports can submitted anonymously. The Lawrence County Sheriff’s Department has a tip line 812-277-2020 where tips can be left.