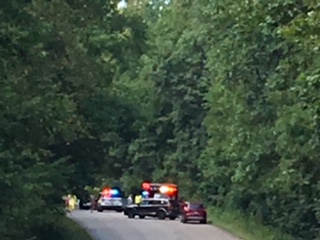 (BEDFORD) – A Bedford man was killed in a two-vehicle accident on Old State Road 37, Thursday afternoon.

According to a Lawrence County Sheriff’s Department report, 26-year-old Dylan Ross, of 2236 I St., died at the scene from internal head injuries.

The car went through the grass in front of the home, then back onto the roadway. It began spinning counter-clockwise across all lanes of travel. The vehicle then entered the outside lane of northbound Old State Road 37 and the driver over-corrected steering the car to the right. This caused the car to spin clockwise in front of a 2005 Chevrolet pickup driven by 42-year-old Robert Cliff, of Bedford.

Cliff saw the on-coming car and attempted to stop his pickup and steer to the left, but was unable to avoid the collision. The truck struck the car in the driver’s side door. After the crash, both vehicles came to a stop about two feet apart.

Cliff suffered an eye and toe injury and was transported by a police officer to a local hospital for a blood-alcohol draw, which is standard procedure for after a fatal accident, and treatment.

Ross was freed from the wreckage by Bedford Fire Department firefighters.