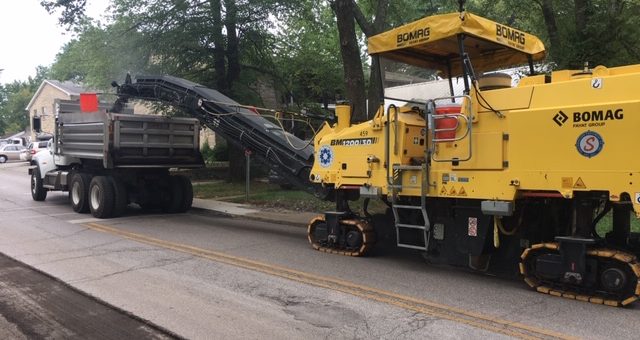 “The whole county should be proud of that,” Holmes added. “That’s a lot. Most people have been pretty gracious.”

Holmes noted there are more roads to pave.

“We are making progress,” he added.

Holmes has submitted the paperwork for the Community Crossing Grant. If awarded, those funds will help pay for paving more roadways.

A resident praised the paving done on Rabbitsville and Yockey Roads, and the commissioners concurred.

“They did a fantastic job straightening out the roadway,” said Commissioner President Dustin Gabhart.

Crews will begin chip and sealing other county roads next week.

“We are still patching, cutting brush and mowing,” he added.

All three commissioners praised the crews for the work done.

“There were a few incidents where we had to do some concrete work,” Holmes said.

Officials have hit a snare on Bridge 150. Questions regarding the historical bridge on Mill Creek Road is pushing back the time frame on replacing the bridge.

“The Historical people are asking why the county wants to replace the bridge,” Holmes added. “They want motorists to travel around Spring Mill instead of over the bridge… I am not sure if this is going to be a problem.”

Crews have put up more barricades in the south lane on bridge 120 on Williams Silverville Road.

“We need to keep traffic off the bridge,” Holmes added.