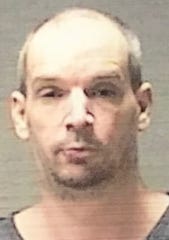 (MUNCIE) – A Muncie man is accused of stabbing his brother and niece.

Matthew VanMatre was at his brother’s home when he was said to be intoxicated and hostile, said Muncie police.

The Muncie Star Press says that VanMatre made comments about killing another person in the home before repeatedly striking his niece.

VanMatre’s brother confronted him, and VanMatre grabbed his brother by the neck and held him against a wall. When the man fell to the floor, VanMatre is accused of taking out a knife and stabbing his brother in the back of his neck, abdomen, hip and lower back, said police.

He then stabbed his niece in the arm, who hit him in the back with a chair while defending her father.

The girl was okay, but her father had to go to IU Health Ball Memorial Hospital for surgery.

After fleeing the scene, VanMatre was arrested around 1:10 a.m. after he crashed his pickup truck into a garage.

The Star Press said that VanMatre is preliminarily charged with aggravated battery, domestic battery with a deadly weapon, intimidation, strangulation, domestic battery and battery. In the past he has been convicted of criminal mischief, criminal recklessness, driving while intoxicated, leaving the scene of an accident, reckless driving and robbery.