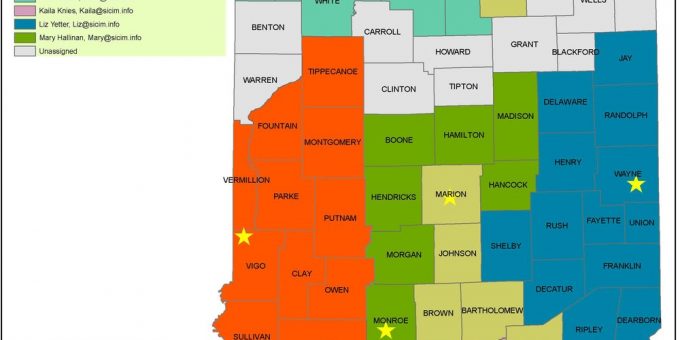 (SOUTHERN IN) – The Indiana Invasives Initiative Advances Grassroots Engagement Across the State Southern Indiana Cooperative Invasives Management has worked alongside the USDA Natural Resources Conservation Service to combat invasive plants and raise public awareness of the devastation caused by these non-native pests.

It became clear that the problem of invasives must be addressed at the local level through local people using local resources. At the end of 2017 to coordinate their efforts, SICIM and the NRCS signed a five-year agreement to develop local Cooperative Invasive Species Management Areas (CISMAs) throughout Indiana.

SICIM launched the Indiana Invasives Initiative (III) in 2018 to implement this agreement. Through the III, a team of five Regional Specialists employed by SICIM are actively working at the grassroots level with local conservation agencies to develop new CISMAs and provide technical assistance to landowners.

This Indiana Invasives Initiative and the team of Regional Specialists is led by Dawn Slack, the III Project Coordinator, who also serves as the Director of Stewardship for The Nature Conservancy.

Amber Slaughterbeck serves West Central Indiana and is based in Terre Haute. She has a background in Environmental Studies and worked previously as Park Naturalist at both the county and state level. She volunteers with various local groups, serves on the board of Trees Inc., and is the Director of Stewardship for Ouabache Land Conservancy.

Erica Luchik serves Northwest Indiana and is based in Rensselaer. She has a background in Wildlife Biology and has worked previously with the U.S. Fish and Wildlife, The Nature Conservancy, Wildlife Habitat Council, and Coffee Creek Watershed Conservancy.

Liz Yetter serves East Central Indiana and is based in Richmond. Liz’s background is in Natural Resource Management and previously worked for the Conservation Corps of Minnesota and the Iowa and the Forestry Department of the Three Rivers Park District in Minnesota.

Mary Hallinan serves Central Indiana and is based in Bloomington. She has a background in Biology and Plant Pathology and previously worked for Eco Logic, an ecological restoration provider in South Central. She is an active volunteer with her local CISMA, Monroe County – Identify and Reduce Invasive Species.

Kaila Knies serves South Central Indiana and is based in Paoli. She has a background in Biology and worked as Resource Management Technician at Spring Mill State Park. She has volunteered with the University of Evansville’s native plant garden, the Vectren Conservation Park restoration project, and the Wesselman Woods herbivory research project.

Early successes of the Indiana Invasives Initiative include the establishment of 10 CISMAS with 8 more currently in progress, coordination of over 40 Weed Wrangle Indiana events, involvement in more than 250 outreach events reaching an audience of 50,000, and completion of more than 65 landowner surveys (in 2018 alone). By the end of 2019, a full two-year recap of the III’s accomplishments will be available to the public.

SICIM’s Chair Will Drews stated, “It’s exciting to see all the progress we are making in terms of bringing invasive species to the forefront of people’s minds around the state. We have some very dedicated staff and volunteers, and we’re excited to keep growing and adding new CISMAs across Indiana.”