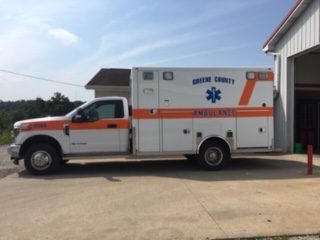 The vote was made to keep moving forward until the Greene County Council can vote to increase wages for paramedics.

The Greene County Ambulance Board conducted a meeting on August 2, 2019. The following were their written recommendations to the Greene County Commissioner to which WBIW obtained a copy.

Recommendations of the Greene County Ambulance Board

1. The Greene County Ambulance Board believes the best emergency medical service for Greene County residents is with the current county ambulance service.

2. The board also finds that the use of a private service will most likely leave the county without equipment or trucks and at the mercy of the service within two years.

3. The board also believes that no matter which type of service is used that the service will need to be subsidized by tax dollars and would rather see those dollars stay in the county with Greene.

4. The board discussed the possibility that a private service may be interested in supplying personnel. Greene County could maintain ownership of equipment and work out a replacement plan by the county, for the subsidy, and a maintenance schedule and insurance needs by the private service.

5. If it were to be necessary to rely on a private service, the following recommendations were made in order to establish guidelines for a Request for Quote:

a. The service should remain an Advanced Life Support service.

b. There needs to be a minimum of five ALS ambulances exclusively for Greene County.

c. Ambulances should be staffed full time for ALS service.

d. Ambulances would be expected to handle all 911 calls as well as transfers to out of county facilities as needed within a 30 minutes or less wait for hospital transfers.

e. The service should be dispatched by the Greene County Sheriffs Department.

f. A sample contract should be submitted with the RFQ for reference.

g. If item four above is a possibility, a second sample contract should be submitted with the RFQ.

The Commissioners all agreed with the recommendations of the Ambulance Board and concurred with their findings. But, until the Greene County Council acts to increase the wages, they instructed the county attorney to draft bid specs for a private ambulance service.

“We all agree they need raises,” Michael added.

Since the April meeting in July, the Greene County Council voted for a 0.2 percent Correctional Rehabilitation Facilities Income Tax to take the pressure off from the Public Safety Tax. This will thus take the pressure off the General Fund to be able to give raises to the Sheriff’s Department, who is also losing personel due to low wages.

Officials say that they want to address the issue sooner than later.

“The sky is not falling; however, we want to be ahead of the situation should the sky fall,” said Greene County Commissioner Nathan Abrams. “Budget hearings are next month, and we expect the Greene County Council will address this and go ahead and give the ambulance service the raises they need.”

Only one person spoke from the public on the issue, and that person was Kenneth Wagner. He offered the commissioners suggestions on how to help the ambulance service get better revenue. He also questioned whether the ambulance service was getting all the revenue it was owed through its current billing service. Ed Michael says the billing service received 4.4 to 4.5 percent of the revenue for billing.

Greene County Ambulance Director David Doane states that current paramedics receive around $45,000 base salary and $49,000 with overtime and double time for holidays. Because they are a government agency, they also receive PERF retirement to which the county has paid more than $750,000 into their retirement funds. Officials state that the benefits are suitable which is why a lot of people have stayed with the ambulance service. Emergency medical technicians make between $32,000 and $34,000 and can make up to $39,000 with overtime.

The ambulance service is currently staffed with 30 employees including Doane and a staff person at the office. However, 28 EMS personnel staff four ambulance stations in Greene County, which includes Bloomfield, Jasonville, Linton, and Solsberry. They were forced to close a fifth ambulance station due to staffing. Linton Rescue provides back-up at times for the county.

Personnel work 24-hour shifts and are then off two days. The staffing issue has increased because employees have found better-paying jobs with other nearby ambulance services, hospitals, or other places of work. The run volume has since decreased due to the closing of two nursing homes in the county.

Budget hearings begin next month for the county and the commissioners are very hopeful that the issue will be taken care of.

The public is encouraged to talk to all three commissioners to discuss any questions or issues that they may have about this or any topic.