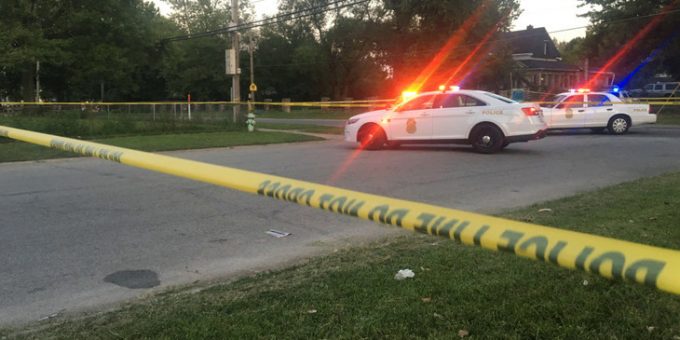 (INDIANAPOLIS) — A violent weekend in the Capital City in which two people were killed and five others were injured.

The violence started late Friday evening with a man being shot and killed by IMPD Flex Team police officers on the northeast side of the city. Maj. Kendale Adams said the officers were keeping an eye out for criminal activity in the area of 42nd and Brentwood Avenue.

The man shot was Deshon Downing, a passenger in a van that the officers pulled over. He pulled a gun out that resulted in the officers shooting him. They were not wearing body cameras.

Not long after that shooting Community Hospital East told police someone walked into the hospital with a gunshot wound from a separate incident. They were treated and are recovering.

That afternoon police in Zionsville got a call about a suspicious package placed on a refrigerator in the kitchen of Zionsville Presbyterian Church.

“Whoever made it was doing one thing and one thing only, was trying to put fear in everybody to make it look like a bomb,” said Zionsville Police Sgt. Brad Kiefer. “Inside the bag was a jar of liquid. In the liquid was a cell phone wrapped in newspaper.”

Sunday evening, IMPD Sgt. Jim Gillespe said a teenager was shot near Henry Burkhart Elementary on the south side of the city at around 7:00. Gillespe said the boy was either 16 or 17-years-old and was shot in a wooded area behind the school.

To cap it all off, two more people were shot a little after 10:30 Sunday night. The man and woman were both found in a car with their children inside at the intersection of 34th street and High School Road. The man is stable, but the woman is in serious condition at the hospital.