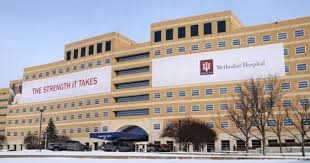 (INDIANAPOLIS) — Two Indiana women who died last month are among only a handful of American women who have donated their uterus so that other women might have a chance to give birth to their own children.

“We very much appreciate that these families said yes to these transplants to help heal and save other people’s lives,” Quire said.

It is not without controversy.

Their identities and the receivers’ are confidential, and Quire declined to say if the recipients reside in Indiana. Uterine donation by living givers has been done for years, but the use of dead donors is a comparatively new medical practice.

The state’s donor network said the first donor was a woman in her 30s who suddenly died. In addition to her uterus, she also donated her heart, liver, kidney, lungs, tissues, and corneas. The surgery to recover her organs took place at Parkview Regional Medical Center in Fort Wayne.

The second uterine donor, a woman in her 40s who also unpredictably died, donated her heart, liver, lungs, and kidney. The recovery of her organs took place at IU Health Methodist Hospital, and her husband told the donor network she had a “loving heart.”

“She would have been happy to know that she saved lives through organ donation and potentially helped another woman know what it is like to be a mom,” the Indiana Donor Network’s release said.

The first time a woman gave birth after a uterus transplant was in 2014. But the donor was alive.

Uterine donation has usually been more controversial than any donation of other organs, such as kidneys or hearts, for a variety of reasons.

To donate a uterus after death, a woman’s family would need to sign an extra agreement form beyond the normal organ donation form.

If someone does want to donate their uterus after death, they should discuss with their family, so they’re ready to give approval if something happens, Quire said.