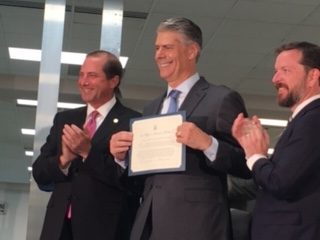 They toured the facilities and met with many of the Baxter Employees, who also joined them in an afternoon press conference Baxter Chairman and Chief Executive Officer Jose (Joe) E. Almeida signed the Pledge to America Workers, joining over 300 companies and organizations who have pledged more than 12 million workforce education and training opportunities for American workers.

During the press conference, one of Baxter’s employees discussed his Stage 2 kidney failure and how he used Baxter’s supplies and equipment to overcome kidney failure, a kidney transplant and how he is now a survivor.

Bruce Pleskow, who travels 3-4 weeks a month, remained working during his dialysis and traveled all over the United States. He never missed days of work while on dialysis. And by staying on dialysis this kept him healthy for the transplant.

Pleskow has been married for over 40 years and is now more than three years post-transplant. Currently, there are over 100,000 end stage kidney failure patients waiting on transplants.

The executive order from the Trump Administration to improve the lives of Americans suffering from kidney disease, and expand options for American Patients, and reduce Health Care costs.

Across America, over 37 million patients suffer from chronic kidney disease, and more than 726,000 have an end-stage renal disease ( ESRD). Nearly 100,000 Americans are waiting on the list to receive a kidney transplant, and kidney disease ranks as the ninth leading cause of death in America.

Approximately twenty percent of dollars in traditional Medicare – $114 billion a year – is spent on American Kidney Disease. Yet of more than 100,000 American who begin dialysis to treat end-stage renal disease each year, one in five will die within a year. HHS has laid out three goals for improving kidney health.

The second thing that brought the HHS Alex Azar and Domestic Policy Council Jeff Grogan to Bloomington was Baxter’s signing the Pledge to America Workers.

President’s Trump agenda is driving an economic resurgence that is creating more and more opportunities for American Workers.

Indiana Governor Holcomb is among those a part of the American Worker Advisory Board.

As part of the National Council for American Worker, the Trump Administration is asking companies and trade groups throughout the country to sign the Pledge to American Workers – committing to expand programs that educate, train, and reskill American workers from high school age to near retirement.

In 2017, sales of $10.6 billion, across two businesses: BioScience and Medical Products. Baxter employees over 48,000 employees.

The Bloomington Facility has over 600 employees and operates out of 600,000 square feet of updated space, on Bloomington’s West Side.